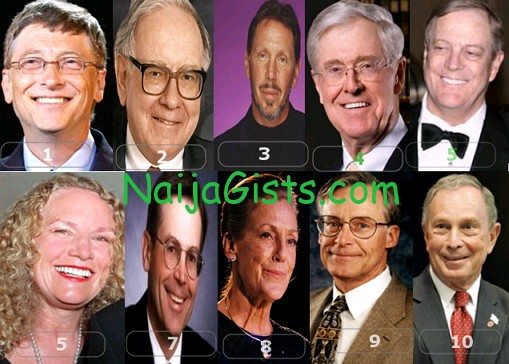 According to the latest compilation by Forbes Magazine, below are the top 10 richest people in the United States Of America in 2012. naijagists.com

Included below is the list of the currently richest people in America, their location and net worth.

Now let’s talk about what these Billionaires are into:

He is not new to everyone. Bill Gates is the owner of Microsoft, a software development company behind windows and other popular window based products.

If you are into trading and investing, Warren Buffett is probably not new to you. He is a business investment expert, author and philanthropist.

He is the founder of Oracle Corporation, a leading enterprise software company.

She is the widow of Walmart’s founder son, John T Walton.

The late John T Walton is one of the son of Sam Walton, the original founder of Walmart supermarket.

She is enjoying inherited $15.7 Billion fortune from her late husband in 2005.

He is the youngest son of Walmart’s founder and the Chairman of Arvest Bank.

She is the daughter of Sam Walton, the founder of Walmart

Samuel Robson Walton is the eldest son of Sam Walton and the chairman of Walmart company worldwide.

Michael is an American politician who is the current Mayor of New York City.

He is the founder of Bloomberg L.P., a financial data-services firm.