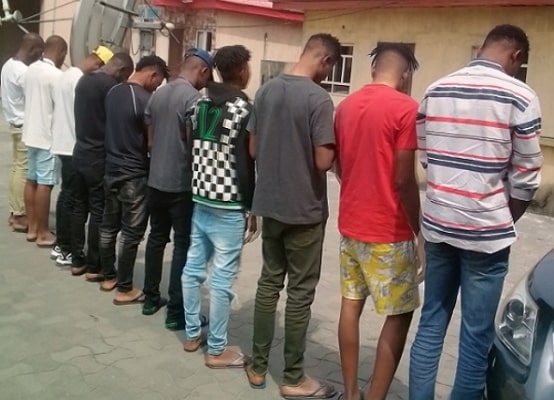 The suspects were paraded at the commission’s head office in Port Harcourt, the Rivers State capital.

Itam said the suspects used American tunes to extort money from their victims and warned the public against releasing their account numbers to persons.

“We have noticed that within the last three months, we have the issue of yahoo yahoo boys who appeared to have resurfaced again.

“The most interesting aspect of it is that we still find people that fall prey to this scam.

“They extorted money from them through I-tunes. The kind of the I-tunes is $100. They find it difficult to collect the money from Nigeria but they collect I-tunes from them and dispose it online in dollars”

“We have four of them in our custody. We still have others who pretended to be American soldiers working and talking to their victims that there were lots of mineral deposits such as gold.

“They contact people online in China asking them to come and buy the mineral deposits.

“In Nigerian they collect N5, 000 each from the unsuspecting public, which they receive from banks from Nigeria.”