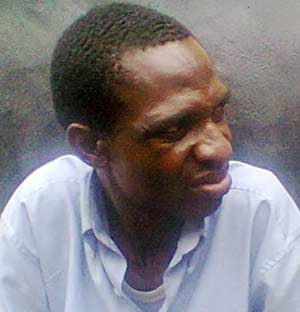 Pastor Phillip Ogbebor, the Founder and General Overseer of a Pentecostal Church in Benin City is now an unusual inmate at the federal medium security prison, Oko after a magistrate court ordered that he be remanded for having sex with male members of his Church.

Surprisingly, the randy pastor of Breakthrough Ministries, Owina Street, off Sakponba road Benin city, neither denied the allegation of homosexuality levelled against him by the parents of one of his victims nor blamed the devil as many culprits will do. Instead, he told Saturday Sun that “I am only passing through temptation. I only did it four times with the man who is 22 years old and a regular member of my church. I can’t claim that it was the devil’s influence , let God decide my case.”

The Commissioner of Police, Mr Foluso Ayodeji Adebanjo told Saturday Sun that the Pastor was apprehended recently by men of the State Criminal Investigation Department of the Edo state police command following a complaint lodged by the father of one of his victims. Trouble started when the victim who had been put under an oath of secrecy by the pastor decided to report his ordeal to his parents who in turn decided to inform the police.

The victim who doesn’t want his name in print told Saturday Sun that he has been unduly harassed by Pastor Ogbebor since 2007 when he was only fifteen years old and that he made him to take several oaths of secrecy in order not to reveal the secret to anybody.

He further said that the suspect threatened to kill him if he disclosed the act to anyone.

According to him, “each time, I told him it is painful and that I don’t want to do it again. I told him I will tell my parents but he forced me to take oath saying if I ever tell anyone I will not live to see the next day”

He furthered revealed how Ogbebor mixed olive oil with sand and robbed it on his head while chanting incantations in an unusual language and casting spells on him, with an emphasis on the fact that if he tells anybody he would die like a fowl. He said to buttress his threat he gave him the liver and gizzard of chicken to eat saying these acts were usually performed at 12.00 midnight under the guise of a night vigil.

The victim who said he is a regular member of Pastor Ogbebor’s church said he was disturbed by his deteriorating health and was forced to narrate his ordeal to another pastor.

It was at that stage that the father of the victim who was in shock over the development reported the matter to the police for proper investigation.

He said the suspect will soon be charged to court after the completion of investigation.

The police boss had about three weeks ago paraded Pastor Ogbebor along with 25 other crime suspects at the command headquarters, Benin city.

Saturday Sun however gathered that the 42 year old randy pastor has been arraigned before a Magistrate court in Benin city on a charge bordering on indecent assault contrary to Sections 214(1) and 353 of the constitution respectively.

The Magistrate was said to have ordered his detention at the Oko medium security prison in the state capital pending the commencement of trial.