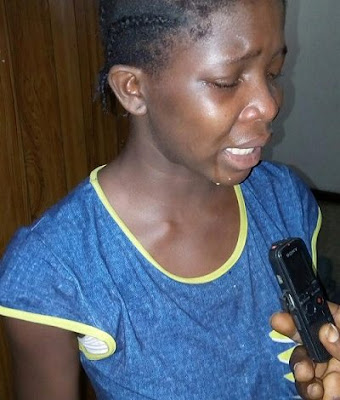 Nov 7, 2017 – 17 Nigerian Girl Deported From Libya Weeps As She Narrates Her Near Death Experience In The Desert In Her Quest To Get To Europe

Blessing Sunday, a 17-year-old Libya deportee has narrated how she survived harrowing experience in the desert in her quest to get to Europe.

She was among the 147 Nigerians that were recently deported from Libya and was brought to Edo State by the Edo State Anti-Human Trafficking Task Force headed by Professor Yinka Omorogbe.

The Task Force took delivery of 83 deportees and lodged them in a hotel with a view to rehabilitate them.

She was all tears when she spoke of how her father sold his belongings to raise money to bail her after she was abducted and kept in a cell in Libya.

Blessing stated that she dropped out school in Junior Secondary School I and went to learn a skill in hair dressing before a woman offered to assist her to travel abroad.

She said several persons in the three Hilux vans they boarded from Kano to Libya died due to starvation and thirst.

“When we got to Libya, I was kidnapped. They made me go call my father and he sold his property to set me free. I am the last child of the family and we don’t have anything at home now.

“There was no food or water in the trip. You see people dying. We bought provision and water and I managed my own in order to survive. My father sold all his property to enable me get to the seaside. I didn’t enter boat on the sea.”

Another returnee who gave his Micheal Ogbebor and had Plaster of Paris on his two hands said he broke his two hands when the ‘White house’ in Suprata they were staying was attacked.

Micheal said he used to wash cars in Lagos from where he raised the sum of N300,000 with which he traveled to Libya.

“We met problem in Libya. I spent eight years to save the N300,000 I used to travel. In Libya, people were always kalabushing each other. That is tracking each other boat. I have not entered the boat when I was rescued and brought back. I wanted to jump from a storey building when I fell.

“They came and saw that I was finished so they left me. It was the UN that came and took me to the hospital.”

Barr. Omorogbe who doubles as the State Attorney-General and Commissioner for Justice said the gesture of the state government was to show that there were good things here.

She stated that the deportee would be kept in the hotel for some days.

Continue Reading
You may also like...
Related Topics:death, experience, girl, libya, near, nigerian