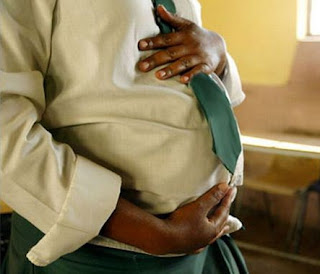 A teenage student who was impregnated by her Vice Principal, Malam Mohammed Mohammed has delivered a baby boy and is soliciting for assistance from the state government to take care of her son.

The victim and her family have decried the neglect by the Vice Principal who is nowhere to be found saying that the victim did not receive any assistance from the accused during and after her pregnancy.

The student gave birth to a baby boy in Injita village in Munya Local Government areas of Niger state in the 28th of October.

The incident occurred in March 2017, when the accused, a Vice Principal in Government Day Secondary School, Tunga Minna, had sexual intercourse with a junior student and impregnated her.

Mohammed was arraigned in court on April 4, and stood trial on a two-count charge of unlawful sexual intercourse with a child, and impregnanting a female student, he was then remanded in prison custody for three months after he pleaded not guilty to the charge and applied for bail.

The accused was granted N1 million bail and after his bail, it was learnt that he was secretly transferred from Government Day Secondary School, Tunga, Minna to an unknown school.

Narrating her experience to newsmen, the Victim said that neither she nor her family received any assistance from the Vice Principal pleading in the state government to come to her rescue to enable her carter for her child and further her studies.

She said that becoming pregnant at such tender age shattered her dreams of becoming a nurse,;

” I am not happy that I am now a mother at this tender age, I will not allow the incident to shatter my dreams of becoming a nurse. I still want to further with my study because I want to be a be a nurse in the future.”

The father of the victim, Malam Haruna Galadima cried out to a the government to ensure that the Vice Principal is found and made to face his responsibility, “What I want now is for my daughter to be taken care of by the man who put her in a family way, he should take full responsibility of the baby’s needs,” he said.

She added that the agency had written to the state Ministry of Education to give some part of the accused salary be given to the victim on monthly basis to carter for her needs.