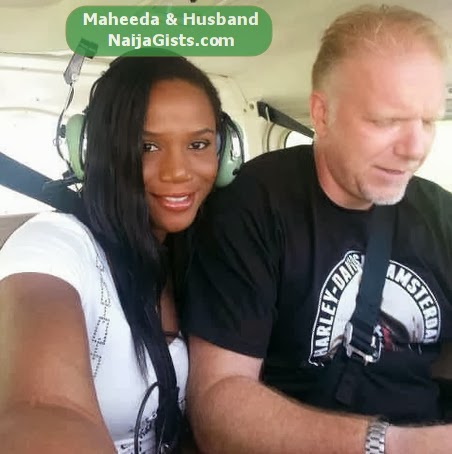 Maheeda real names Caroline Sam, a self-confessed born again Christian who came into limelight last year after an interview with Daily Sun has returned to her vomit.

The Edo born gospel singer who said she was once a prostitute gave her life to Christ this year but when it is all said and done, she has turned back to her old ways.

The controversial personality who just came to Nigeria from Europe where she is based has revealed why she returned to her old ungodly lifestyle.

Caroline Sam made an open confession that she has repented and found Christ. She said the reason she posted naked pictures of herself on her twitter and instagram accounts lately was because she wanted to show the world how sexy she is.

She was a special guest on a programme monitored on Galaxy Television, Lagos, Thursday morning. She said she was a born again Christian at a time but later backslid in her calling.

Maheeda  said despite the fact that she is still spiritually inclined, she does not regret posting her semi-nude pictures on the social-media.

“I’m not posting those nude pictures on the internet to teach people to start going naked, I posted them because I felt I am sexy and I love sexuality.

“In Europe, where I live, at a certain age, parents will start to teach their children about sex education. But it is unfortunate that I came from this part of the world (Africa) where sentiment is attached to everything.

“I’m 31 years old and I can’t pretend to behave like a baby or something. I’m sexy and I like it. I’m still spiritually inclined and I have some gospel songs which are not out yet. One of them is Papangolo,” she said.

When told that she was supposed to be a role model and should not be the one posting nude pictures on the internet, she replied: ”I think the parents has a lot to do in that respect. They should try as much as possible to prevent their children from going naked on the streets.

“They should teach them sex education. Those nude pictures you see is Maheeda. That is me. I am just expressing myself. I’m sexy and I am only appreciating that fact because I love sexuality,” she averred.

She had earlier in an interview talked about how she struggled to quit prostitution and turned to God for help.

She was quoted as saying “even after getting married, I still have this urge of going out to meet a man. But I felt it should not be so. I’m trying to let people know there is a spirit behind prostitution.

“If there were no spirits, why after getting married, I still have such urge. I have everything. I live in Lekki, I’m driving a very big car and my husband gives me whatever I want, so why would I still feel like going into prostitution?

“There is a spirit behind it. I continued prostitution even after getting married. The only thing that changed me was being born again and being delivered.”

Maheeda had received severe criticisms from Nollywood movie director Charles Novia as regards her raunchy pictures on twitter and instagram.

Novia in an article entitled: “Maheeda’s maladjustment,” wrote about the prominence of naked pictures of the singer on different social media.

Maheeda has been banned from Instagram for sharing naked photos of herself in a bid to attract attention.