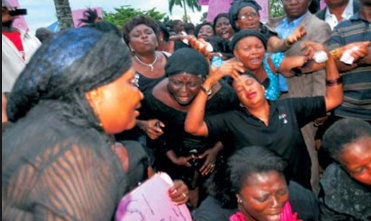 Area residents of Ikeala Ahiaba community in Obingwa LGA of Abia State were on Tuesday thrown into mourning when the news broke in the community that their traditional ruler, HRH Eze James Nwabeke was assassinated by unknown gunmen.

The incident it was gathered happened at about 10pm Monday night when most of the villagers must have gone to bed.

The body of the traditional ruler, according to reports has been deposited in an undisclosed mortuary.
A source in the community who spoke anonymously narrating the incident as was gathered from a family source told our correspondent that the gunmen after killing also injured other members of the family, though they were to know the number of wounded persons.

The source said that the incident has thrown the community into panic as they were yet to know the reason why the gunmen could invade the palace of the monarch to unleash such a dastardly act on their king.

According to Udeviotu, the gunmen were four in number, stressing that the incident happened “around 01:25hrs.”

He further disclosed that the wife of the Obingwa king was severely shot by the gunmen and that she is currently receiving medical attention in an undisclosed hospital, stating the reason such dastardly act was yet to be established.

“From the look of things, the gunmen were ready to take more lives, because after killing the monarchy in his palour, they went to one of his son’s room and shattered it with bullet. But one of his sons escaped being shot after he ran away into the bush,” PPRO explained

He said that the State CID investigation team were already investigating the matter and would not want to speculate any reason for the invasion until investigation into the matter was concluded even as he appealed to members of the public with useful information to make such available to the police.

While assuring of the safety of Abians and visitors to the state, he said that they leave no stone unturned in unraveling the mystery behind the murdering and assassinating of the Abia monarch in his house by the gunmen, urging the of Ikeala Ahiaba Autonomous Community to remain law abiding citizens and avoid taking laws into their hands.