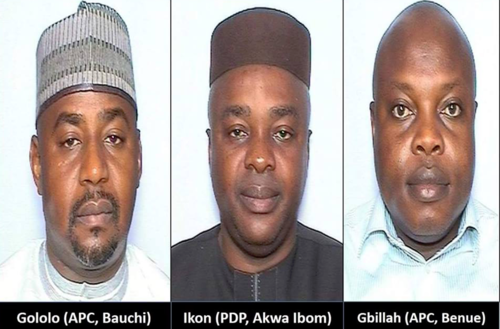 The Chairman House of Representatives Committee on Media and Publicity, Abdulrazak Namdas, has disclosed that the House will investigate allegations that three of its members were involved in sexual offences while on a trip to the United States for a leadership programme.

According to the envoy, Gbillah and Ikon asked a staff of the hotel they were lodged in to engage prostitutes on their behalf and Gololo attempted to rape a housekeeper.

Speaking at the weekly briefing of the Media and Publicity Committee, Namdas said the leadership of the House is committed to investigating the allegations.
However, he was not forthcoming on the procedure to be adopted in investigating the lawmakers.

“As a responsible parliament, the leadership of the House, having received the letter from the Ambassador of the United States of America to Nigeria is conducting its own investigation.

Also Gbillah and Ikon in separate statements yesterday, denied any wrong doing, saying they have commenced the process of clearing their names.
Ten lawmakers were invited by the US government for the International Visitor Leadership Programme held between April 7 and 13, 2016, in Cleveland, Ohio.
Entwistle’s letter read in part: “It is with regret that I must bring to your attention the following situation.

“Ten members of the Nigerian National Assembly recently travelled to Cleveland, Ohio as participants in the International Visitor Leadership Programme on good governance.
“We received troubling allegations regarding the behaviour of three members of the delegation to the US Government’s flagship professional exchange programme…”

“While the housekeeper reported this to her management, the incident could have involved local law enforcement and resulted in legal consequences for Representative Gololo.