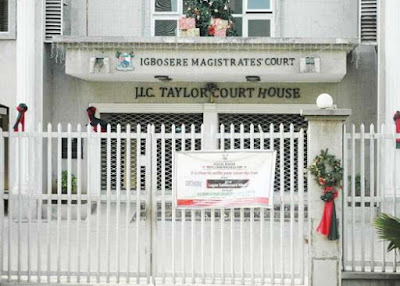 A Nigerian lawyer simply identified as Chidi died today inside the court room of the Lagos State Magistrates’ Court in Igbosere.

The deceased and his clients Okedairo Okedeji, 38, and Akolade Agbola, 28, who were alleged to have stolen meat and snail worth N28,000 from Southern Sun Hotel in Ikoyi, Lagos came late to court due to traffic gridlock.

The lawyer before his demise explained to the court that their lateness was due to heavy traffic. While trying to plead with the Magistrate for another adjournment date, he was caught short by fits of coughing and began gasping for breath.

When the coughing would not stop, he started clutching his chest and gasping, ‘Obim!’ ‘Obim!’, the Igbo word for ‘My chest!’ ‘My chest!’

Those around quickly helped him, unloosen his tie and helped him outside the courtroom to get fresh air.

One of his defendants quickly carried him on his back but before they could reach the staircase, he appeared to have lost consciousness.

He was put inside a taxi cab but minutes later, the driver returned to the court premises and declined to take his corpse for fear of police harassment.

Police are still looking for his relatives.