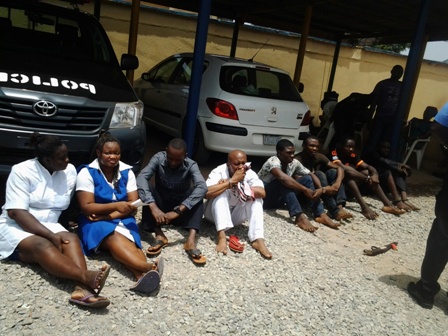 A certified Nurse and Homeopathic doctor have been arrested in Onitsha for child trafficking.

The suspects identified as Dr Ossai Odilie and Chindinma Nzeh were caught with one Anthony Molokwu, a fake Laboratory Technician and Miss Ogechukwu Nzegwu, a nurse in training at a private Hospital at No 99 Unatico House in Upper Iweka where two pregnant women 16 and 22 years of age were evacuated.

The commissioner said that the four persons were arrested on March 11, 2016 sequel to a credible information received from members of the public.

In another development, police caught up with two suspected cultists, Chinedu Togbo 22 and Maduka Odoh 21 years at Enugwu Agidi junction along Enugu-Onitsha Expressway on the 1st of March 2016.

A single barrel gun and two cartridges were recovered from the suspect.