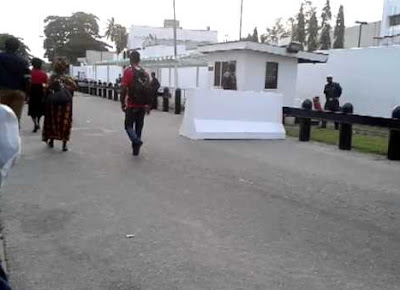 The officials of the United States of America Consulate General office in Lagos, Southwest Nigeria have apprehended a man with forged documents and immediately invited the operatives of the Police Special Fraud Unit, PSFU in Ikoyi, Lagos to arrest the suspect.

Trouble started for the suspect identified as Lukman Ogunsuada 28, when he went to the United States Consulate General office on Walter Carington Crescent,Victoria Island, Lagos on 11 October,2017 to present a letter of invitation and other documents to the officials for interview knowing fully well that the documents were fake with the intention to use the documents to obtain Visa B1 and B2.

Nemesis, however, caught up with the suspect when the officials after perusing through the documents, discovered that it was fake and invited the police to arrest him.

After investigation by ASP Lawal Audu and his team, Ogunsuada was arraigned before an Igbosere Magistrates’ Court, Lagos on a two-count charge of felony to wit. forgery of documents.

Police Prosecutor, Wewe Adegbayi informed the Court in charge No I/63/2017 that the accused deliberately presented forged documents to the America Consulate officials with the intent that it might be used or acted upon as genuine to obtain Visa B1 and B2 to the prejudice of the United States Consulate General.

Adegbayi said that the offences the accused commited were punishable under sections 365 and 366 of the Criminal Laws of Lagos State,2015.

The accused pleaded not guilty to the alleged Crime in the open Court and Magistrate J.A. Layeni granted the accused bail in the sum of N100,000 with two sureties in like sum who must deposit the sum of N10,000 each in the Court registrar’s account.

Layeni adjourned the case till 21 November, 2017 for mention and ordered that the defendant be remanded at Ikoyi prison, Lagos pending when he would perfect the bail conditions.