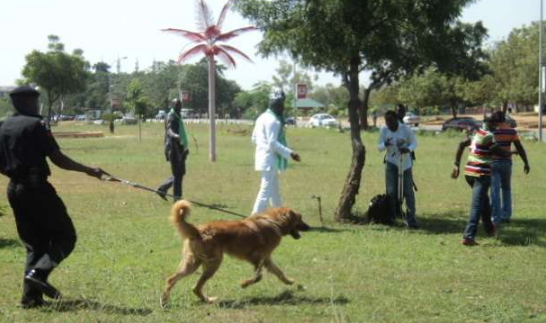 An Igbo trader is still in police detention for insulting the name of one Alhaji Buhari after naming his dog Buhari.

The 30-year-old trader who sells female wears in Sango Ota reportedly wrote Buhari on both sides of his dog but last weekend, an Hausa neighbour complained bitterly that he named his dog after his late father, Alhaji Buhari.

He later reported the matter at Sango Police station.

Moments later, the trader was arrested and detained after police saw the inscriptions on the dog.

However the suspect reportedly ordered his kinsmen to kill and eat the dog to cover up any evidence police might use against him.

The suspect has been transferred to Ogun State Police Command headquarters at Eleweran.

A police source said the suspect boldly wrote Buhari on both sides of its body and was seen parading the neighbourhood dominated by Hausas with it.

He is currently facing breach of public peace and attempting to cause religious chaos.

The suspect identified as Joe Fortemose Chinakwe is making frantic effort to secure his bail.