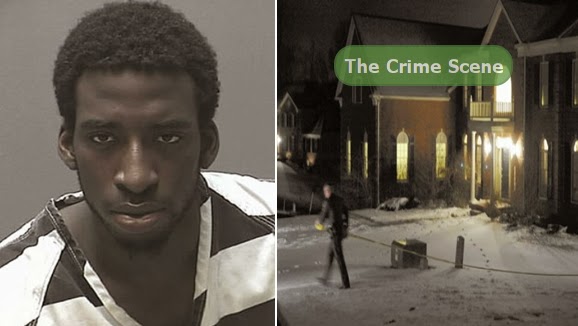 The middle-aged Nigerian man pictured above has murdered his own mother. He is currently in police detention awaiting charges for second degree murder.

Read the detail story below:

A wealthy Nigerian family based in the United States of America has suffered a very horrible tragedy following a disaster that happened on Wednesday at their family house in Maryland.

According to Police detectives, Isaac made his escape in the family white Lexus SUV moment after killing his mum. He was caught at the intersection of Putnam Road and Crouse around 4:30 am in the morning.

Isaac Ojiabo Jr is currently in Police detention. He is scheduled to be charged with 1st & 2nd degree murder and assault with a deadly weapon.

Police disclosed that the lifeless body of Isaac’s mother, Joy Ojiabo was discovered on the 2nd floor of their mansion around 5pm on Wednesday by her husband, Mr Anya Ojiabo after returning from work.

Upon discovering the lifeless body of his wife, he called 911.

According to police detectives, Ojiabo’s neighhour said the family moved into the area approximately six years ago.

In 2013, police were called into their house 3 times for domestic disturbances involving the late Joy Ojiabo and her son, Isaac who eventually killed her.

After receiving 911 calls from their neighbours, police visited the house in March, September and December 2013 warning them to reduce their noise.

“Just because we’re there a half-dozen times doesn’t mean we’re going to arrest anyone, nor it is indicative that this young man was going to do this,” . said a police official

The suspect, Isaac graduated from Fallston High School last year. He worked at a local Subway fast food restaurant. His mother, Joyce was an attorney.

The wealthy couple, Anya and Joy Ojiabo bought their 6100 Sq-ft house from Toll Brothers (a builder) in November 2007. They reportedly paid $1,032,847 for the mansion.

Reacting to Joy Ojiabo’s demise, many Nigerians said Isaac would have been a better boy if his parents had sent him to Nigeria to learn culture.

This is so so sad! May her soul rest in perfect peace!