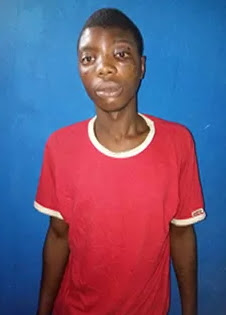 May 19, 2016 – Photo: Man Arrested In Ogun State For Stabbing Best Friend To Death With Broken Bottle While Arguing Over Liverpool Vs Sevilla Europa League Game

Tella reportedly stabbed Abiodun Abdulkareem to death with a broken bottle while the two where arguing after Liverpool Vs Sevilla match yesterday.

According to eyewitnesses, Tella a die-hard fan of Liverpool was full of regret yesterday over the murder of his friend and how his team lost the match.

Tella is now cooling off in police detention.