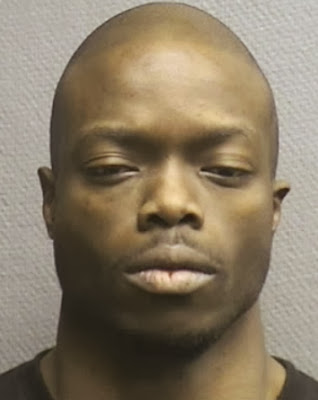 A Nigerian man who displayed the highest level of insanity by going on a destructive rampage in Houston Texas on Sunday has been arrested by Police.

Ugo Iyegbu, an 18-year-old alleged drug addict was caught by Texas Police officials after he vandalized several cars and a convenience store for no reasonable reason.

He was caught on camera arguing with a convenience store clerk over having to pay before pumping gas. Moment later, he was spotted breaking the lottery machine. He later moved on to destroy the coffee maker.

Shocked by his madness, the convenience store clerk could do nothing but stand back and watch.

Another camera caught the suspect knocking over the snack stand. Total destruction time is 2 minutes.

Outside, a third camera shows the suspect pulling out what police say is a shotgun and smashing the car of an innocent bystander.

But the suspect didn’t stop there. Police say he drove his car across the street to this luxury car rental business where the story goes from strange to just plain bizarre.

Police say for some unknown reason, Iyegbu stripped off all his clothes, and in the Unclad, began destroying luxury cars — six of them, including this white Lamborghini.

Prosecutors tell us Iyegbu’s apparent meltdown caused damages in the range of $100,000-$200,000 by striking the cars with the butt of a shotgun.

The destructive rampage came to an end after officers were able to talk the suspect down off one of those cars.

He has been charged with felony criminal mischief.

Ugo Iyegbu is currently cooling off in Texas Police detention.

NaijaGists.com has witnessed a sudden increase in tribalistic comments from Nigerian commentators in the past few days…. From henceforth, any hate or tribalism related comment will be removed. Thank you