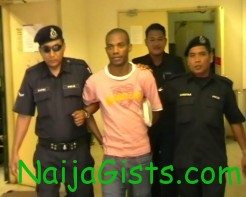 This is a very heartbreaking story of young Nigerian Man by the name of Eric Chimezie Oluigbo. naijagists.com

The 34-year old man was sentenced to death in Malaysia for a drug trafficking case that happened back in 2010.

Eric Chimezie Oluigbo was arrested while trying to distribute 22,159 grammes of cannabis at a traffic light in Napoh, Malaysia, on the morning of September 1, 2010.

He was charged under Section 39 (B) of the Dangerous Drugs Act 1952 which carries a mandatory death penalty upon conviction.

At this stage, there is nothing anyone can do to rescue him.

We learnt Nigerian authorities tried to rescue him however, when you have been sentenced to death in Malaysia for drug trafficking, there’s no going back.

May his soul rest in perfect peace and may this serve as a lesson for others following his footsteps.