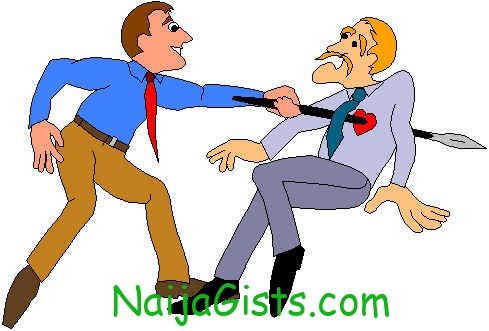 A man named Fidelis Ekuegbu was stabbed to death in Lagos recently when an argument ensued over a cup of water. And his suspected killer has been arrested and taken to court. naijagists.com

According to PM report, the deceased and other apprentices, Ebubechukwu, Ebuka Nwoye, Ifechukwu Okafor and John Mbam were having their dinner when a fight broke out over a cup of water.

During the fight, the glass of water was broken. John allegedly picked up part of the broken glass and stabbed Fidelis in the stomach and he started bleeding profusely.

Eyewitnesses claimed he died because of excessive loss of blood.

John Mbam was arrested by the police. He has been arraigned before an Ebute Meta Magistrate’s Court in Lagos on a count charge of murder.

His plea was not taken because the court lacked jurisdiction to try the case.

The presiding magistrate, Olatunji ordered the suspect to be remanded in prison custody. The case was adjourned while awaiting the Lagos State Director of Public Prosecution, DPP’s advice.