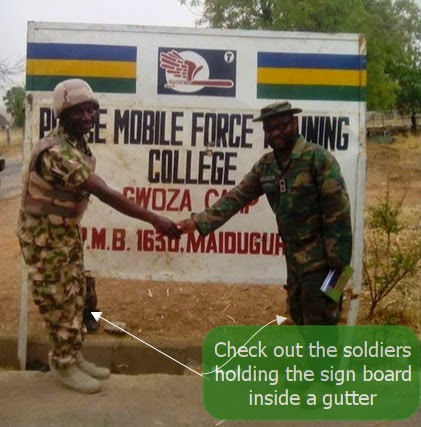 Last month Jonathan promised that his government will crush boko haram 6 weeks to election and on Thursday, he said the insurgents will be sent out of Nigeria on Friday.

So in support of his promise, the military has framed up a pictorial victory pose that has gone viral.

2 soldiers were spotted posing for the camera infront of a signboard being held by two soldiers inside a gutter filled with sand..

Who is fooling who??? Why is the Federal Government working overtime to confuse Nigerians with false victory in order to deceive Nigerians a day to the election???

Meanwhile, some residents in Borno said Boko Haram terrorists are still controlling many Local Government areas of the state.

May God deliver this nation from evil and selfish leaders.

Zack Orji: My Bishop Ordained Me As Pastor, I Became Born Again In The University
Kollington Ayinla: Salawa Abeni Is Still My Wife & My Children’ Mother, She’s My Property Till Death