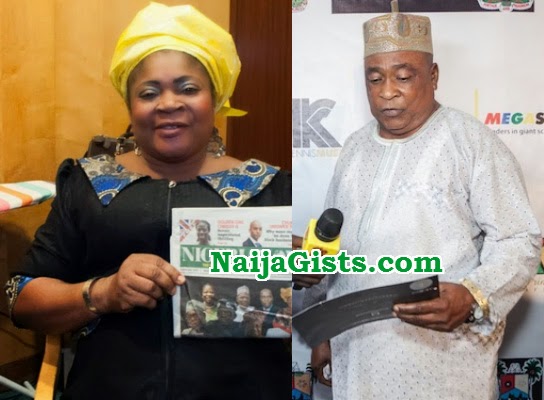 March 28, 2015 – Kollington Ayinla: Salawa Abeni Is Still My Wife, She’s The Mother Of My Children & My Property Until Death Do Us Part

“I’m The Father Of All Fuji Musicians In Nigeria……

In this exclusive chat with Fuji legend Kollington Ayinla, he talked about the origin of Fuji music.

He went further to talk about his relationship with his ex-wife Salawa Abeni and fellow Fujician, Wasiu Ayinde Anifowoshe Marshal.

Fuji music is one of the biggest genre of music in Nigeria, as one of its pioneers, did you ever imagine it would become this big?

I never imagined that it would become this big at all. We just saw it as a child’s play when we started. It was like a hobby. But now everybody is either singing or dancing to fuji music. Although we never thought it would become this widely accepted, I am glad about what it has become today.

Why did you choose to sing fuji when there were other music genres you could have easily chosen from?

It was because fuji music was derived from Islamic religion. When I was growing up, during the Ramadan festival, whenever we wanted to wake people up early in the morning to eat and proceed to the mosque for prayers, we normally sang. Then, we called it ‘Were.’ But when you attained a certain age, you couldn’t sing ‘Were’ again. By then, it became fuji. We had the likes of Saka Layigbade, Abinuwaye, singing fuji then but they all lived in Lagos Island. Sikiru Ayinde Barrister was in Mushin while I was based on the Mainland. ‘Were’ metamorphosed into fuji.

Up until now, women still chase me. I am a man.

At your age, do you still consider their advances?

Of course, I indulge them when they are making such advances at me and if they give me a chance, I would do times two of what they are asking for.

Why did you not pay Salawa Abeni a visit when she was seriously ill?

I later went to visit her. The reason why I did not go initially was because I didn’t think it was right for me to read such news about her on the pages of the newspapers first. My children are with her and she was supposed to send one of them to me to inform me that she was ill. I don’t go to places that I am not invited. I later went to see her anyway.

Is there any possibility of both of you living under the same roof as husband and wife?

We are husband and wife. She does not have a child for anybody else other than myself. I am her bona fide owner and we are together till death do us part. It does not matter if we live under the same roof or not, she is still my wife.

We learnt that you played ‘baba ijebu’ lotto and won millions of money, how true is it?

It is an absolute lie. I swear to God I don’t even know what the paper they use to play ‘Baba Ijebu’ looks like. I don’t gamble. I am not against those that play it but I have never indulged in such. People have been peddling that rumour for over five years. Whenever I hear such, I just laugh. I don’t even know who Baba Ijebu is and I doubt he knows me.

With all the rumours and controversies that have trailed you, has there been anytime you regretted being a public figure?

I have never regretted it because I know that is how it happens all over the world. It is only that I am not free to move around like normal people. Before you know it, a crowd would have gathered just to see me.

We learnt that there is a rift between you and K1?

It is not true. There is no rift between us. K1 has been my son in music for many years before the death of his master, Barrister. People carry rumours that he says certain things about me but if such is the matter, I will handle it with maturity. There is no rift between us. When he was giving away his daughter in marriage, I went. He also invited me to his K1 Unusual Concert and I was there. I am the father of all fuji musicians in Nigeria. Anywhere they play fuji music in the whole world as the last man standing among my contemporaries, I would be recognised. I am their father.

You sang about a lady, Taiyelolu, how is she?

I loved her then when I sang about her. I loved her then but not anymore. She misbehaved, so I left her. She has been in London with my children for over 20 years. We are no more together.