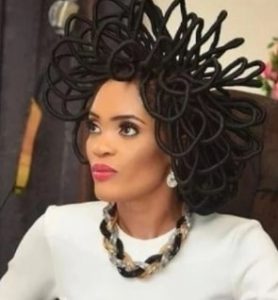 The model who shared the information in an interview with an online television, wears her hair in several long strands of woollen threads strung together to form a ‘basket like’ shape.

When asked about the inspiration for her signature hairstyle in the interview, she replied, “Talking about my hairstyle, this hairstyle is worth 40 million”.

The top model and fashion enthusiast added that she loves to showcase her unique personality and thus, her personality is hard to understand.

“I have been asked on several occasions about this question. Sometimes is not really easy to understand my personality.

“I love to be unique. Because when you look around you will see that everyone style look alike and I am the kind of person that can spend any kind of money.

“I can go through any kind of stress or inconveniences just to stand out from the crowd,” .

Her claim was met with skepticism and clap backs from some Nigerians on social media, especially Instagram, who argued that the hair could not cost so much.

@Youngest_senator wrote, “She said 40 million, so till she defines the currency, we would say it’s just nothing.”

@Anike_fabrics wrote, “We are sorry, we are not fighting you. On behalf of fellow Nigerians, 40 million what? Thank you.”

However, Lann shared a video on Friday, in response to the criticisms reiterating that the hair actually cost N40 million.

She dispelled the notion that she was hard on drugs for claiming that the hair cost that much, stressing that she was in her right senses when she grated the interview.