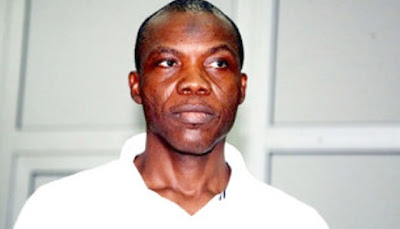 Oct 2nd, 2013 – Nigerian Muslim Man Who Helped Trained Al-Qaeda Members In Yemen, Lawal Babafemi Aka Ayatollah Mustafa Held Without Bail In the US

Lawal Babafemi, a Nigerian man popularly called Ayatollah Mustapha who was accused of trying to help al-Qaeda terrorists network in Yemen appeared before a United States federal courtroom on Friday.

He was accused of training with members of al-Qaeda in the Arabian Peninsula and using his English skills to help publish the terrorist magazine “Inspire.” Judge John Gleason ordered Babafemi held without bail. No plea was entered, reports NBCnewyork.com

Prosecutors said Babafemi is married with children in Nigeria and helped al-Qaeda attempt to recruit people who speak English to engage in acts of terror against Americans. The FBI said Anwar al-Awlaki, the American cleric who became the al-Qeada commander in the Arabian Peninsula and was killed in a US drone strike, personally directed $9,000 be paid to Babafemi to assist in his recruitment efforts.
Sitting silently at a defense table, Babafemi wore a blue and white striped polo shirt as he listened to the hearing without the help of a translator. His attorney did not object to his being held without bail, but told the judge Babafemi suffers from high blood pressure and asked that he receive medication when he gets to the Metropolitan Detention Center.

Investigators said Babafemi was active with al-Qaeda operatives from 2010 to 2011 until he was arrested for crimes in Nigeria. He was then turned over to FBI agents to be prosecuted for his alleged terrorist activity. “The defendant threw his efforts behind al-Qaeda in the Arabian Peninsula’s media, recruitment, and weapons training campaigns in an effort to strengthen the terrorist group’s grip on the region and extend its reach throughout the world,” US Attorney Loretta Lynch said in a statement. His transfer to the United States comes amid increasing concerns about the growing footprint of al-Qaeda affiliated organizations in Africa. Al-Qaeda in Yemen has tried to use an underwear bomb on an airliner heading to Detroit and has hidden explosives in printers to try to bomb cargo planes. Al Shabaab — a Somali-based group linked to al-Qaeda — is believed to be behind the recent mall attack in Kenya.