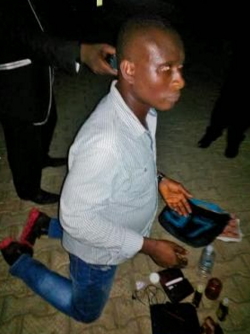 A Pastor identified as Samson Onyeka has been arrested for allegedly duping one of his church members.

According to police detectives at SCID Panti Yaba, the suspect reportedly told Mrs Temitope Akinbowale to buy a bottle of anointing oil from Israel at N1.2 million to cure her aged mother of an undisclosed ailment.

The incident happened at Ikola road in Ikola, Ipaja where the victim resides. The church is also located there.

According to a police source, the victim approached Onyeka to express her worries over her mother’s sickness and her desire to have her healed.

Onyeka sympathized with her and told her to bring money to buy holy oil from Israel which will heal her mother instantly.

After the victim allegedly paid the money, he gave him the so-called anointed oil and asked her to give it to her mother to drink until she was healed.
He promised her that the oil would heal her mother within a specific time because of its spiritual potency.

However, it turn out that the oil did not cure her mother any ailment as he claimed, rather the ailment became complicated and worse because they abandoned her drugs and relied only on the oil for healing.

When the period Onyeka gave her elapsed, she noticed her mother’s condition deteriorated.

She told Onyeka who in turn advised her to bring more money to buy another healing oil from Jerusalem, the victim rejected the idea and requested for her money back.

Police later discovered that the oil was fake and very harmful to human health.

The suspect is currently at Ikoyi prison custody.

The case will come up for hearing on May 4.

Hehehehe….Holy oil from Israel, another from Jerusalem…. Wonders they say shall never cease.