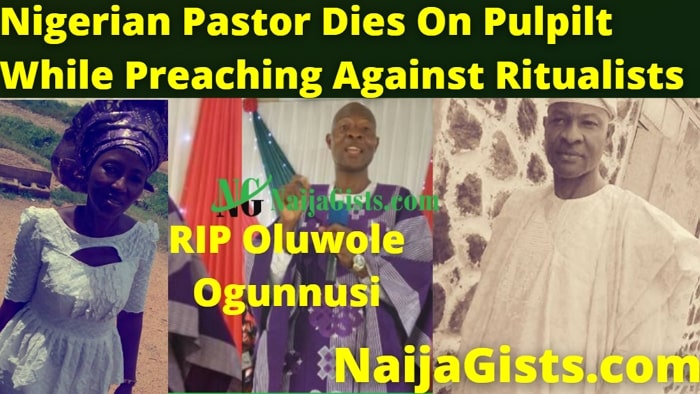 Widow Of Nigerian  Pastor, ECWA Deacon Who Died On The Altar While Preaching Against Ritualists Breaks Silence

The wife of late Nigerian Deacon, Oluwole Ogunnusi who passed away last weekend while preaching on the pulpit has broke her silence.

Before now, a viral video shows Deacon Ogunnusi the moment he died of suspicious attack when he slammed ritualists in his sermon on Sunday.

According to social media sources, Deacon Oluwole died after he slumped at the Evangelical Church Winning All (ECWA), Onikoko, Abeokuta, Ogun State.

His wife  who witnessed the horrifying event said he was rushed to a local hospital where he passed away.

Here is what the widow said about her late husband;

“It is a thing of shock, it is an unending film in my life. I pray we live long to reap the fruits of our labour but he couldn’t, he did not, it is sudden, because we both laboured together.

“He was supposed to be reaping his labours now that things are getting better for the entire family, the extended family, this now happened.

“It is a season film, it’s a shock to me and I pray God will take care of me, the children and all the family he left behind.”

“My husband, Oluwole Francis Ogunnusi is a very caring, loving husband with an act of humility. Open-minded, he is ready to satisfy others before himself, that’s him.

“There was no strange sign. He was healthy and agile. I haven’t watched the trending clip about my husband’s death but I was in the church while he was preaching and there was no sign of tiredness or weakness.”

Below is the viral video of the late Pastor on the altar, the moment the attack happened.