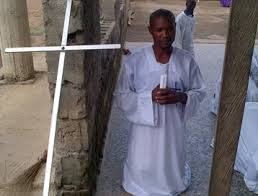 One Pastor Emmanuel Okwedimbu has been arrested and charged before Ejigbo Magistrates’ court for allegedly defrauding and threatening to kill one of his church members over N1.4m land scam in Lagos State, western Nigeria.

Okwedimbu allegedly collected the money from Amobi Charles under false pretence of assisting him to purchase a parcel of land for him which later turned out to be false.
The incident happened in Idimu area in Alimosho Local Government Area of Lagos where Charles met Okwedimbu.

We gathered that Charles contacted Okwedimbu as his spiritual father and informed him about his plans to acquire a parcel of land in Lagos to build a house.

He asked Okwedimbu to pray over it and give his blessing so that his dream will be achieved.
It was gathered that Okwedimbu prayed and encouraged him to do so with a promise to assist him get the genuine land where he would achieve his dream.

Charles gave him the money to buy the land and left, waiting when he would inform him that he had bought the land.

After waiting for several months to no avail, it was alleged that Okwedimbu started dodging him after he had exhausted all his excuses.

Charles then confronted him and asked him to refund his money since he could not get any land as they agreed. It was then Charles realized that Okwedimbu had no intention to buy the land or refund his money.

It got to a point that Okwedimbu warned and allegedly threatened to kill Charles if he demanded for the money from him.
The matter was reported to the police at Idimu command who invited Okwedimbu and he refused to show up.

The police trailed him to his house to arrest him and when he saw Charles and the police officers, he took to his heels. But the police pursued, caught up with him and arrested him.
He was taken to the command where he confessed that Charles gave him the money to buy land but said he had spent it.

He was charged to court on a five-count charge of conspiracy, fraud, threat to life, attempt to escape and obtaining under false pretence.
He pleaded not guilty.

The presiding Magistrate, Mrs J. O. E. Adeyemi admitted Okwedimbu on bail in the sum of N100,000 with two sureties who must show evidence of tax payment for three years.

Okwedimbu was remanded in prison custody pending when he will perfect his bail condition.
The matter was further adjourned till 29 February, 2016.