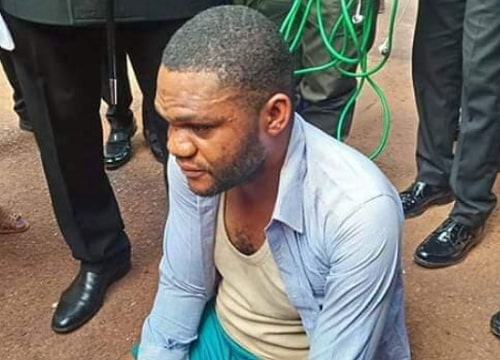 Meet Sunday Egbo, a 26-year-old self proclaimed Pastor and founder of Christ Deliverance Ministry in Nsukka, Enugu State who was recently arrested for defiling a church member.

In his confession to Raphael Ede, he narrated how he met the teenager he allegedly defiled and how he visited a native doctor to help grow his ministry.

See his confession below:

How did you become a pastor?

I was a gospel musician, singing in churches and prophesying. I was following different men of God. Three years ago, I could have become mentally ill. There were prophesies that I would become a pastor but I did not believe them.

My father was a native doctor and I am the last child of the family. One of my siblings is a priest with the Methodist Church, Nigeria.

Anytime I was on the road, I would hear a voice talking to me. The voice would say – do you choose to work for God or become mentally ill?.

So, I decided to work for God. My ministry is four years old and I have more than 300 members in the congregation.

You were accused of patronising a native doctor to procure charms. Can you tell us about it?

Well, it was not my wish to go to a native doctor. When I was in a difficult situation, someone led me there. The person told me I was not doing well and that I needed powers. The problem is that I’m in a village and don’t have rich people in the ministry. Even the money they give as offering cannot sustain me, even to feed. So, the guy told me he would take me to a place where I would be given something that would make rich people come to my church. It all turned to be a fraud. I was told I would receive money in ‘Ghana Must Go’ bags (a type of large bag).

How much did he charge you?

How come you had N200,000 to give somebody for charms but were accused of not paying rent?

It was this January that I went to the native doctor. I had the problem last year. I went to the native doctor earlier this year to ensure that I would not experience what happened to me last year when I couldn’t afford to pay rent. But unfortunately, when I came back home and used the spiritual materials as was directed, which was to bathe with the soap and local sponge for seven days, nothing happened. I called to tell him I didn’t get any money and he said that a spirit was blocking it. He recommended that I should perform a sacrifice to make everything okay. He asked to send him N24,000 which I sent but I still didn’t get any money in bags. I called him again and he said that there was something else that needed to be done because a spirit was blocking the work. It was at that point that I got angry with the native doctor and asked him to refund my money.

Where did you get the small coffin allegedly found with you?

It was one of the things the native doctor gave me. The soap I bathed with was inside the coffin and when I wanted to bathe, I would open the coffin.

So, what was the coffin for?

I don’t know. I was told that while bathing with the soap – that looked like black soap – with local sponge, I should be praying and saying, ‘I need money’. I started using the soap in January, 2019. I can tell you that nothing the man promised happened.

What did you do with the women’s panties and brassieres found in your house?

I have to stand by the truth even if I will be killed. The panties were not inside the coffin. Nothing was inside it apart from the soap. I disposed of the coffin when I discovered that I had been defrauded. Those panties and brassieres were taken from the backyard of my house and put in the coffin.

Are you living with a woman?

Yes. My aunt and a lady lived with me. My aunt has left. My aunt’s panties and bras were not among them. I had a girl called Chetachi. She was once with me. When she left my house, she didn’t go with her belongings. Her clothes were still in my house. They (police) packed her panties and bras to blackmail me, to try to prove that I am a ritualist.

She is in her parents’ house, if I am not mistaken, because her mother said she was an ‘Ogbanje,’ meaning she was a witch, and that she couldn’t stay with a man of God.

Why was she staying with you in the first place?

Why were you accused of raping a girl in your house?

Although the pressure was so much, I did not rape the girl. Nobody wants to believe me.

The girl’s name is Ifebuche. Her mother is a member of my ministry. There is nothing I will say that will make anyone believe me because I made a mistake by inviting her to my house. Some weeks ago, on a Friday, I called the girl and asked her what she would be doing that weekend. I said I wanted to see her. She told me she was free and would come over anytime I was willing to see her. I asked if I could get her passport so that I could help her look for a job. I asked if I could see her on a Saturday and she said yes. On the Saturday, I didn’t see her till 4pm, so I called her to find out what happened. She said she went to Nsukka to do something. I waited. Later, she arrived. We hugged and I offered her some water. We started discussing and by the time we finished, it was around 7:30pm and she said she wanted to go. I told her to sleep over and leave in the morning because it was already late. She called her mother and I told her that she wouldn’t be coming home that night. I also told her mother that by midnight, I would call her on phone and do some prayers with her.

So, what happened after that?

I know I am a sinner but I did not rape her. We were watching a movie in my room and when it was around 2:30am, I put off the generator. Then I started fondling her. I told her I wanted to marry her. I asked if she liked me and she said yes and that if it was the will of God, she would marry me. So, we were fondling each other. When I became aroused, she didn’t allow me to have sex with her. I asked what the problem was and she said nothing. She only permitted me to touch her breasts. So, I told her not to touch me either so she hugged me and put her head on my shoulder. Then she started touching my manhood. I appealed to her to have sex with me but she refused. Although I really wanted her for marriage, I got angry and slapped her twice and she started crying. She cried bitterly and I was angry with myself for inviting her to my house.

So, I begged her to forgive me. She said that I invited her and because she refused to have sex with me, I slapped her, so she asked what she did to me to deserve that. I told her it was a mistake and that she should forgive me. I promised not to ever touch her again. I was even surprised when she started crying. Yes, I beat her but God knows that I did not sleep with her. I have been tortured and cannot see with one of my eyes. Three days ago, I couldn’t walk normally. The beating was too much so I had to agree that I raped the girl. For about eight days, the police tortured me. They asked me to confess that I raped her and be alive. I had to say I raped her but the truth is that I never raped her.

You were accused of using a magic stone to charm her after raping her?

The stone can be bought in any market for N200; the police called it a magic stone. I never told her to put her hands on the stone. She called her mother and started crying. She said I wanted to kill her and that her mother should come and take her home. She called her mother three times and later told her not to come again, that she would return home in the morning. When she ended the call, I knelt down and begged her again. If I raped her, may God not set me free and may heaven not save me. I called her mother on the phone to explain things to her but she told me I had made a mistake by messing with their family. Later, the girl started banging the door that she wanted to go home and I had to let her leave because my neighbours could hear the sound.

Did her mother come to your house the following morning?

Yes. I was thinking about running away but something told me not to run away because I had done nothing wrong. Around 8am, the girl stormed my house with her mother and elder brother. So, when the little girl I was living with opened the door for them, they barged into my room. Her brother ransacked my house and they started beating me and calling me a rapist. He dragged me down the staircase and told one of my neighbours to get a taxi for him to take me to the police.

To my surprise, the girl raised her skirt. She didn’t wear panties, and even bra. Her brother asked me where I kept her panties and bra. I told him I never removed his sister’s panties and bra. I told him I would pay N100,000 to atone for my sin but I didn’t have up to that amount. He told me to borrow money from my neighbours. While they were ransacking my house, they stole the phone my neighbour was charging in my parlour. Her brother later asked me for N50,000 to end the matter but because I could not produce N50,000, I was taken to the police. 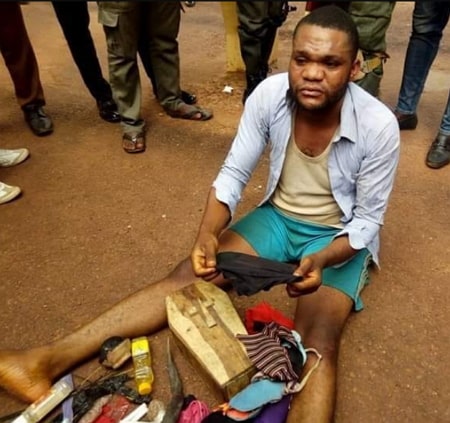 Have both of you been tested in hospital?

Yes, but I don’t know the results. The police took me to the hospital and asked her brother to take her sister to the hospital, and he did so. What I have to tell other men of God is if you are really called by God, be faithful to God and don’t worship any other god with Jesus. I don’t know whether it is juju that is causing all these problems for me. Let your Bible be your strength and always pray. I also want people to pray for me because I don’t know where this will lead to. 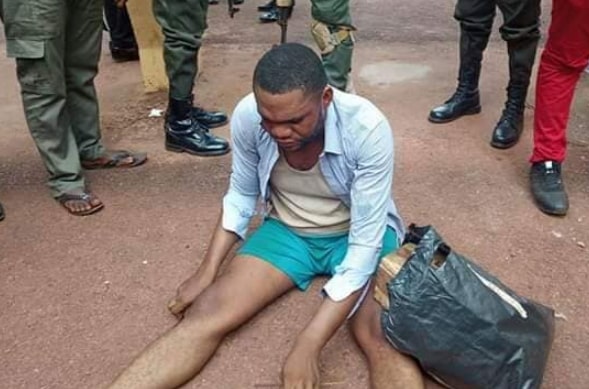