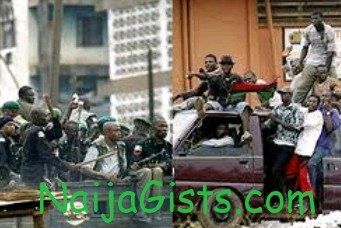 According to Leadership news, the Movement for the Actualization of the Sovereign State of Biafra (MASSOB) has identified the corpses of those found floating in the Ezu River at Amansea community, Awka North Local Government Area of Anambra State as those of their members who were in police custody.

MASSOB Director of Information, Comrade Uchenna Madu, claimed in a press statement made available to newsmen yesterday that the controversial corpses were those of their members who were arrested by security agencies in different parts of the Anambra State last year but were never released, nor charged to court. He alleged that they secretly executed alongside other criminals by the security agents and dumped in the river to cover their tracks.

According to him, they were arrested at MASSOB’s security office at Onitsha, Anambra State, on Novemberc 9, 2012, by a combined team of Nigerian security agents – Army, Police and SSS – and were later handed over to SARS’ headquarters in Awkuzu, Anambra State, where they were detained until their suspicious disappearance.

Madu said: “We got information from an insider at SARS headquarters, Awkuzu, that armless MASSOB members detained at SARS were secretly killed alongside other robbery suspects.”

Meanwhile, the acting spokesman of the Anambra State police command, Mr. Emeka Chukwuemeka, reacted to the MASSOB claims by saying that it was only the outcome of the autopsy being conducted on the specimen taken from the corpses that could state whether the claims by the group were true or false.”