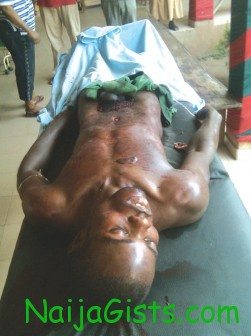 The deceased, identified as Demola Aderinto, 25 was said to be playing football with his colleagues on the empty road when policemen arrived the scene and fired at them.

The injured were rushed to the Ifako-Ijaiye General Hospital, where there was no medical personnel on ground to attend to them. They were later rushed to a private hospital. The injured were identified as Ela Bujor Samuel, Alimi Abubakar and Idera.

The death of the young man caused pandemonium in the area as his colleagues carried him in a cart to the police station at Agege. The protesters were seen carrying the corpse to the Agege Police Station to protest the killing.

False Report From The DPO

At the station, the DPO of the station, CSP Segun Fabunmi, explained that his men had to shoot the young men playing football on the street because they attempted to disarm his men who rushed there when they learnt that there was disturbance in the area.

He described the youths as hoodlums, adding that his men acted in self defence.

Another report from Kano also indicated that two protesters were shot dead by security officials deployed to contain the riot in the city.

Which kind yeye Police we have in this country self, imagine a guy playing football with his friend not even a protester.