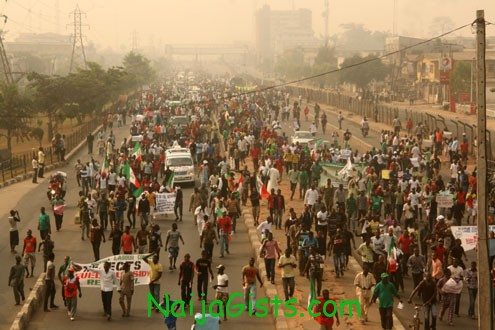 Several Abuja residents trooped out enmase this morning to join forces with the NLC and TUC in their protests against the removal of subsidy on premium motor spirit, otherwise known as petrol by the Federal Government. naijagists.com

The protesters defied repeated announcements made last night by the FCT Police Command that no protest would be allowed in Abuja. The announcement directed would be protesters to confine themselves to the large parking lot of the National Stadium in Abuja close to the city gate.

The FCT Police commissioner had stated in the announcement that the prohibition of protests in the city centre was to check miscreants who may capitalise on the mass protest to breach security in the city centre.

According to PM news, the warnings were ignored by the residents who were adequately mobilised by the joint action group made of civil society groups in collaboration with the TUC and the NLC.

The popular and ever busy Berger Roundabout was a ghost of itself until about 7:18 am when NLC and TUC members and Abuja residents started to converge there. The place soon became a beehive of activities as solidarity songs rent the air with protesters carrying placards.

The government was accused of maintaining contradictory position on dealing with state of insecurity in the nation by alleging on one hand, that it knows the perpetrators of violence across the nation, especially in the North where hundreds of lives of innocent Nigerians have been wasted, and on the other hand, claiming that the perpetrators are faceless.

Christians and Muslims alike were charged to unite and place a demand on the Federal Government to unmask the perpetrators of the violent crimes.

Those who spoke during the protest march which started from the Berger Roundabout through Wuse Market and Aminu Kanu Crescent, also within the Wuse District of the Abuja metropolis, called on the Federal Government to lead by example by reducing the number of cabinet members by half as well as the number of his aides, including special and personal assistants before visiting hardship on the over impoverished Nigerians.

The Federal Government was also called upon to cut by 70% the estacode and number of foreign trips undertaken by government officials and to remove the subsidies allocated to public officials on transportation as well reduce by half, the money budgeted for the President’s feeding this year.

The workers’ bodies called for the publication of the names of those who were paid to import petrol but ended up importing a mere two million metric tons of the product and to commence their immediate prosecution. They also demanded that those who got contracts for the turn-around maintenance of our refineries be prosecuted.