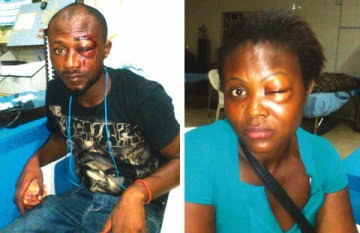 A man and his wife are currently being treatment at an hospital in Lagos after an attack by a wicked police officer.

29-year-old Ejeh Smith and his 26-year-old wife, Grace Smith were tortured last week Wednesday by a policeman identified as Dada Ogunsanya with his assault rifle.

According to witnesses, the attack happened at Lekki Roundabout last week  while the couple was heading to their house in Parkview Estate in a taxi.

The police officer attached to Ikoyi Division was among 7-man patrol team in the area around 10pm on Wednesday.

The police team was said to have stopped the taxi driver and demanded that he opened his boot for a routine check.

The taxi driver, Ndubuisi Iheaka, told our correspondent that after he opened his boot which contained scaffolding belts, the policeman demanded to see his driving licence.

“I was about getting the driving licence when he started flashing his torchlight on my passengers who were sitting at the back.

“The wife told the officer not to flash the torch on them since the inner light of the vehicle was on.

“Because of what she said, the policeman asked them to come down from the cab. This started an argument. The next thing I saw was that the policeman pulled my passenger (Ejeh) by his trousers, and his wife went to plead with him to stop.

“But instead, he slapped her and punched her husband. He was wearing a ring, which inflicted a deep cut on Ejeh’s face. After that, he used the butt of his gun to hit him in his eye and face. He also dragged his wife on the road.”

Grace said the policeman, apart from slapping her, stepped on her tummy.

“If I was pregnant that night, I would have lost my pregnancy. I was only trying to pet him to leave my husband since he did not have business with us. I told him to face the cab driver and leave us alone. “The other policemen were just looking at him while he dragged me on the ground. A man riding a tricycle at the time was the one who rescued me. He said the policemen must call their Divisional Police Officer or else he would not leave the scene,” she said.

The Ikoyi DPO, Mrs. Aisha Haruna, was said to have arrived at the scene.

Ejeh claimed he could barely see because blood was dripping from his eyes, while his wife was vomiting blood. He added that the DPO ordered that they be taken to the station to make statements.

He said, “But we told her that we needed to first treat ourselves before we could make statements. That was when we were given forms and referred to the Falomo Police Hospital. We paid for the treatment and we also went to the eye clinic for treatment.”

His wife claimed that the DPO seized her phone and asked an inspector at the station to delete all the pictures and video recording she did of the incident.

“Even my personal data were deleted. And when I asked the DPO why she did that, she said we deserved the treatment we got. She said she would have locked us up in the cell if not for our injuries. She said we did not know how to talk,” she added.

The family lawyer of the victims, Mr. Sunday Agbinya, said his office would write a petition to the Inspector General of Police to redress the wrong done to his clients.

“This is a case of assault occasioning harm and we intend to challenge it. We will send a petition to the IG. We want the police to conduct a full investigation into this,” he said.

The legal officer of a non-governmental organisation, Project Alert on Violence Against Women, Mr. Ben Odeh, said the police officer responsible for the act should be disciplined for torturing the couple.

He said, “It is a breach of their constitutional rights. The policeman went too far.”