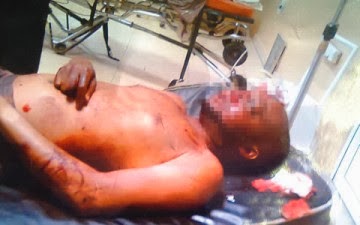 One of the victims of police brutality in Nigeria has died.

28-year-old Saheed Waliu who reportedly fell into coma after being brutalized by some police officers is dead.

According to family sources, Waliu gave up the ghost around 9am on Sunday at the Lagos State University Teaching Hospital, Ikeja, Lagos.

His aged mother, Sadiat, had reportedly kept vigil through the five-month ordeal in the hope that Waliu would get better.

His sister, Taiwo, said,
“We were outside the hospital ward as usual that Sunday when a nurse called to tell us that something was wrong. There was only one doctor available because of the strike. The doctor gave us some prescription to buy; she didn’t say what exactly had changed in Waliu’s condition. We left to buy the drugs. By the time we returned, they told us he was dead.”

He was buried on Tuesday according to Muslim rites.

Already, a non-governmental organisation, Know Your Rights Initiative, have written a petition to the Inspector General of Police on the issue.

The Force Police Public Relations Officer, CSP Frank Mba, when contacted, said, “We condole with the family and friends of the deceased, who is said to have died on Sunday. However, while the Force does not condone any act of irresponsibility from its officers, we are constrained at the moment because of insufficient facts.

“As it is, Waliu’s family cannot identify the policemen by names, the make of their car, registration number or the inscription of the vehicle. These are facts that make it easy to trace the offending officers, bring them to justice and quickly conclude the investigation.

“While it is understandable “that the deceased’s family might not have taken note of some of these facts on the night of the incident, at least someone should have noticed the name tag of the alleged police assailants.

“If the family of the deceased can make this information available to us, it would greatly help our investigation and ensure that those alleged to be responsible for Waliu’s death are brought to justice.”