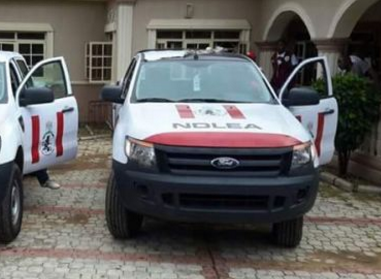 An official of the Nigerian Police Force has been arrested for abuse of office and drug trafficking.

The suspect who is said to be a serving Police inspector in Kogi was nabbed with a truck loaded with 75 bags of Cannabis which worth over N4million.

The criminal identified as 33-year-old Inspector Abali Zagi was arrested in Lokoja inside the Police Welfare truck with Plate # NPF 7973 C.

Zagi was among the 14 suspected drug traffickers paraded at the National Drug Law Enforcement Agency headquarter in Kogi state on Monday.

He was said to have picked up the banned substance in Okpila area of Edo state.