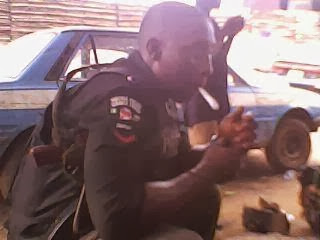 Pictured above is an unidentified Police officer caught smoking weed while on duty.

The same photo has been circulating the social media since yesterday.

The guy who took the picture with his cellphone claims the substance is weed from the smell of it.

Folks who also spotted the picture online said the scene is from Port-Harcourt from the colour of the taxi in the picture’s background.

These are the same folks who have power to arrest people caught with cocaine or weed.

Even public servants are the most corrupt and law-breaking people in this country.

This is a clear indication that most Nigerian Police officers are irresponsible.

No wonder there are frequent cases of accidental gun discharge and increased extra-judicial killings.

Nigeria Police Force is urged to get to work in order to ascertain the identity of the man in question so others can learn from it.