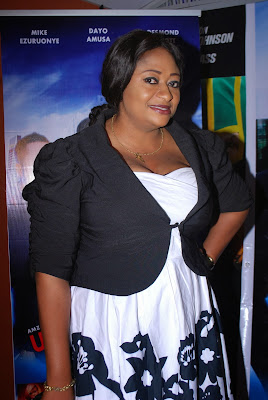 Nollywood actress Ronke Ojo popularly called Oshodi Oke has dropped a can of worms on African men especially the Yorubas.

This was disclosed to E247 Magazine during the Premiere of Dayo Amusa’s movie “Unforgivable” last month.

In October, the talented Yoruba actress laments ill treatment being given to Nigerian women by their husbands.

Ronke’s emotions had been sooo stirred up after watching Unforgivable movie that she couldn’t help but vent.

Read what the actress said below:

“I say to people on a daily basis that I pity African women. Our men, especially the Yorubas, see their wives as slaves. You have to go out of your way to do everything. They want you to be 110 percent submissive. I can’t really understand.

Most married people are dying of lack of emotion and care from their men. Every woman wants to be in her husband`s hands enjoying love and care.

Nigerian men are just not real; they are wicked. You have a wife and you don’t show her love or care, but you’re buying her clothes; is it all about money? It’s really sad that African men are not romantic. They are too full of ego.”

This speaks volume about her relationship with her US-based husband, Mr Sylvester Gbolahan. After two years of separation, she reconciled with him last year and welcomed a baby boy this year. The actress just returned to Nigeria from the United States Of America.

Dear men, do you agree with Ronke’s claim?