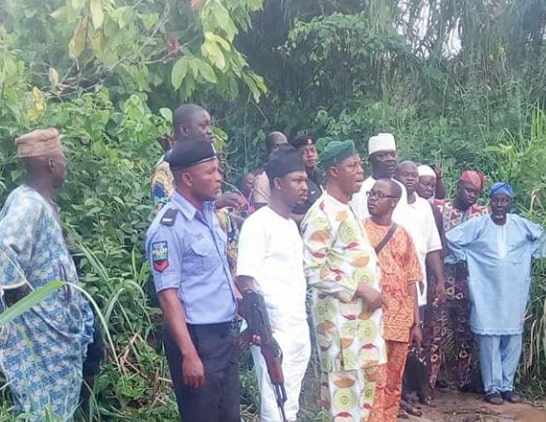 One person has died, a female Police officer abducted while two other persons were gravely injured in separate attacks on people in Egbado North/ Imeko Afon Federal Constituency in Ogun State by suspected Fulani herdsmen.

The Nation gathered that a passenger in a commercial vehicle was attacked on the way from Abeokuta to Ayetoro on Tuesday with the driver shot dead on the spot. Also, about an hour later, a Policewoman attached to the Area Command Office, Ayetoro Police Division was kidnapped and the officer’s car was abandoned by the roadside.

The abducted officer’s whereabouts’ still remained unknown. Another person, Segun Ileyemi, was attacked earlier around Olorunda on Sunday in an attempt to rob him of his belongings. He was stabbed severally and still receiving treatment on his hospital bed at the General Hospital, Ayetoro.

A Federal Lawmaker representing the area, Hon. Olaifa Jimoh Aremu (OJA), who lamented the spate of attacks on his people by the suspected Fulani herdsmen, urged the security agencies to live up to their duty of protecting lives and properties in his constituency.

Olaifa while urging the security agencies to be proactive and device measure to arrest the situation, he also appeals to Governor Dapo Abiodun to pay attention to the plights of the Egbado North/Imeko Afon Federal Constituency in the areas of Security and road rehabilitation as criminals often take advantage of the impassable roads in the area to attack their victims.

“I am sad to formally bring to the public notice of an unacceptable renewed onslaught of Fulani Herdsmen on my Constituents of Egbado North/Imeko Afon Federal Constituency in Ogun State. While my people like others globally are grappling with the troubling effects of COVID – 19 pandemic, no fewer than three cases of attacks were recorded on the Abeokuta – Olorunda – Aiyetoro/Imeko Road in the last four days; all in the hand of these tormenting Fulani herdsmen.

“One Segun Ileyemi was attacked around Olorunda on Sunday 3rd May in an attempt to rob him of his belongings. He was stabbed severally as he is still receiving treatment on his hospital bed at the General Hospital, Ayetoro. Another Passengers Commercial vehicle on its way from Abeokuta to Ayetoro was also attacked two days ago with the driver shot and died on the spot.

“It is gloomy to further note that a Policewoman attached to the Area Command office, Ayetoro was kidnapped same day the commercial driver was shot dead with the officer’s car left by the roadside while the occupant was kidnapped by the men of underworld.

“I am aware that her whereabouts and those holding her hostage are still being tracked by the necessary operatives.

“It is no longer news that the dastardly acts of the Fulani Herdsmen in my Constituent of Egbado North/Imeko Afon is legendary as records are available at various offices of security agencies but for how long will this continue?

“I plead with the Security Agencies to device better and more proactive measure to put an end to the operations of these neighbours turned enemies as they mostly lay siege on our roads waiting for my constituents to either rob them of their belongings or to kidnap them outrightly.”

Reacting, the Public Relations Officer of the Ogun State Police Command said the Police are on top of the situation and were working to rescue the abducted female officer alive and bring the criminals to face justice.

Continue Reading
You may also like...
Related Topics:nigerian policewoman kidnapped by fulani