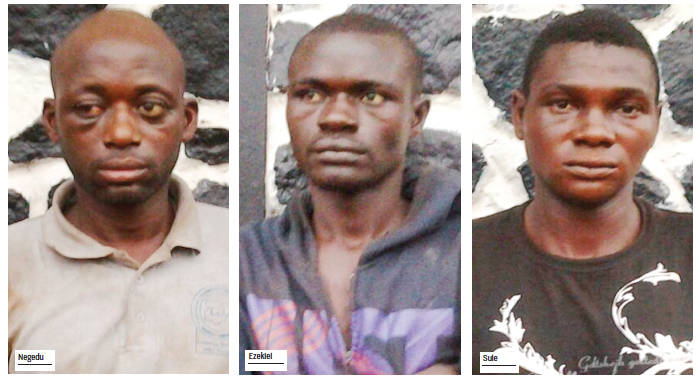 Sergeant Odubanjo Christopher and Sergeant Ohizua Francis are no novice when it comes to hunting criminals and engaging in gun duel with hardened armed robbers.

They have battled a lot of armed robbers and most times, left the battle field bloodied, but smiling triumphantly in victory. These men, attached to the Intelligence Response Team of the IGP’s Monitoring Unit, under the leadership of a Chief Superintendent of Police (CSP), Mr. Abba Kyarri, have witnessed a lot of battles in their lives.

But recently, they had to battle the mother of all battles. These gallant policemen, while in the line of duty, with four others, were ambushed by desperate and blood thirsty kidnappers. The six policemen were in a police decoy operational vehicle, with some arrested suspected kidnappers, when bullets started raining on them.

The scene was like one straight out of an American movie. The policemen jumped out of the moving vehicle, scampering in different directions. In their determination to escape and be alive, they didn’t remember to take their suspects. Incidentally, it was the same suspects that led the policemen, into, what they later called, ‘valley of death.’

The policemen, who were hunters, suddenly became the hunted. They ran until they couldn’t run anymore. At that point, images of their wives and kids must have flashed through their minds as they wondered if that fateful day would be their last on earth. When the smoke from the kidnappers guns cleared and the booming guns became silent, the police took head counts and discovered that Francis and Christopher were nowhere to be found.

The four policemen stared coldly into one another’s eyes and did what they often do not remember to do. They prayed. A police source said: “The fact that the policemen survived was nothing, but sheer miracle! Our policemen were gallant.

The policemen ran in different directions. They were in a strange village. The village was already having clashes with another village, thus the residents are always suspicious of everyone. Four of the policemen later found themselves, but Francis and Christopher couldn’t be found.” While the four policemen were thanking God that they escaped death by a whisker, they also prayed that their missing colleagues would be found alive. They alerted their boss, Kyarri. He immediately made a beeline for Kogi State.

Meanwhile, Christopher, who was running from the hail of bullets, found himself outside the forest. He had allegedly sustained bullet wound and was all bloodied. He had unwittingly run into a village. The suspicious villagers grabbed him and wouldn’t listen to his introduction that he was an officer of the law. They brutalised and tied him.

They later handed him over to some local vigilante men. Francis, who also scampered in another direction, had sustained injury. He found himself in the midst of some stern faced men. These were another set of the local vigilantes. These men listened to Francis’. While they were listening to Francis’s story, calls came from the men, who had grabbed Christopher.

Thus, the two policemen were reunited. The vigilante men would later call Kyarri and other policemen. There was back slapping of joy as the policemen, who earlier feared the worst, realised that God had given them another change to live. Kyarri radioed for re-enforcement, and, together with his men, they once again stormed the dreaded valley of death.

Continue Reading
You may also like...
Related Topics:attack, nigerian, Policemen