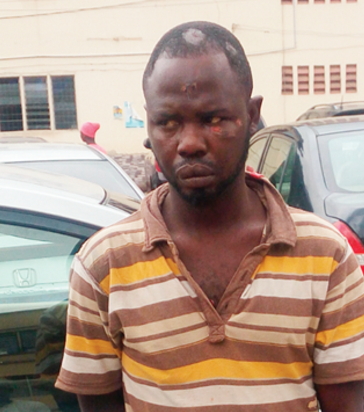 In his confession, Ajose told police he became a fraudster to raise the N80,000 doctors requested to carry out a life-saving ceasarian section operation for his now late wife.

This is what the suspect told police after his arrest:

“I used to be a shoemaker. My wife was pregnant and when it was time for delivery, the doctor said it would be through caesarian section(CS), which would cost N80,000. I didn’t have N80,000. I had to start running around to look for ways to raise the money. I ran to my friend Wasiu, who told me that he would teach me how to make money. He told me he would teach me how to become a fraudster (419). He said my financial problems would soon be over.”

Ajose said he was yet to get the money before news of his wife’s death came. The suspect was arrested after members of his syndicate, defrauded a young lady, identified as Barakat Owolabi of N503,000. Owolabi said the suspects were able to convince her to submit her sister’s Automatic Teller Machine(ATM) card, which they used to withdraw money.

When the original owner of the ATM card started seeing withdrawal alerts, she reported the matter to Gowon police station.

Detectives attached to the station later tracked down Ajose, and arrested him and members of his syndicate.

Nigerian Policemen Who Survived Ambush Attack By Kidnappers Recount Near Death Ordeal
Photo: Women Arrested For Renting Out Their Babies To Street Beggars