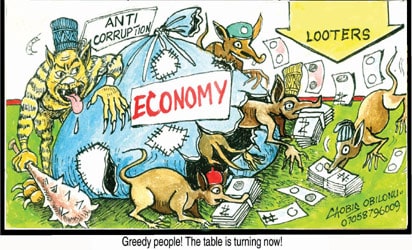 The political crooks who plundered the wealth of Nigeria have found safer havens in Morocco, Johannesburg and Ghana, where they are investing their loot in properties, Economic and Financial Crimes Commission (EFCC) Acting Chairman Ibrahim Magu said in on Tuesday yesterday.

He said looters have shifted base from Dubai, The United Arab Emirates (UAE).

According tot he EFCC boss, Dubai hitherto, an attractive investment destination for looters, had lost its appeal following better anti-corruption cooperation between Nigeria, the UAE and several western countries.

He said looters got more desperate to sell off their properties in Dubai, but afraid that the EFCC “will get to know it.”

Magu spoke at a media parley at the commission’s Lagos Office.

He said the Federal Government was mounting pressure on United Kingdom (UK) to extradite former Petroleum Minister Mrs. Diezani Alison-Madueke, so that she can face trial following the country’s failure to prosecute her over three years after it began investigating her for corruption.

“We are working with other law enforcement agencies seriously. I attended an INTERPOL meeting in Dubai, I was there for five days and there were interactions.”

“So, I told my colleagues in the NCA (National Crime Agency) and CPS, Crown Prosecution Service (in the United Kingdom) that ‘No, it doesn’t make sense; if you cannot do it, give us, because we have gone to London and back, even America.

“The Americans, Nigerians and the United Kingdom; we met in London, we met in Washington, we met here several times, so we have done a lot of things you cannot even imagine.

“This Diezani case is everywhere. Any law enforcement agency that comes to Nigeria; even last time, the people investigating the Malabu case, they came, they just finished last Saturday and returned to their country. We had exchange of information.

“So, the case has become very notorious, it has touched everywhere. You cannot investigate a matter endlessly; there are a lot of expectations; that’s why we said ‘give us if you cannot take action. Give us, we can take action.’ We are still insisting.

“I met Nigerians in the Diaspora and I begged them to put pressure on the authorities to help us extradite Diezani and repatriate whatever loot has been recovered.”

The EFCC boss said it was also on the case of “so many other politically exposed persons who are even in Ghana. For instance, Johannesburg; and even Morocco has become a haven.

“If you sell one property in Dubai, we will get it. I’m telling you. All countries of the world are no longer tolerating this nonsense. The world has realised that loot and proceeds of corruption dent their economy.”

Magu vowed to, in collaboration with foreign anti-graft agencies, block inflows and outflows of illicit funds ahead of the 2019 polls.

He said” “So, we work together and it is getting very difficult for you to move money in and out of Nigeria throughout the electioneering period; so difficult, absolutely impossible.”

According to him, the EFCC is apolitical and would not take sides during the 2019 polls. He urged Nigerians to resist vote buying and pledged to prosecute money launderers.

Magu said: “Let me state upfront that we are apolitical at the EFCC. However, the concern of EFCC is with those who seek to use the political space for money laundering. We would enforce the provisions of the anti-money laundering law to the letter, no matter whose ox is gored.

“Some vested interests are already attacking us for our stand on the side of the law. Let us remind them that the law is no respecter of persons.”

As another evidence of its impartiality, Magu hinted that the commission would move against an unnamed high ranking member of the ruling All Progressives Congress (APC) in the coming days.

He said the EFCC was investigating a petition against former Edo State Governor Adams Oshiomole before he became All Progressives Congress (APC) Chairman.

The EFCC chief vowed to prosecute any lawbreaker, whether in the APC or the Peoples Democratic Party (PDP).

Magu patted the commission on the back for its “tremendous” convictions.

He said: “I recall that at the last interactive session, I announced that the Commission had recorded 158 convictions, including the cases of two former governors who were jailed 14 years each and a senior lawyer who bagged a year jail term.

“But as I speak with you, the number has increased tremendously. As at November 30, 2018, the figure has jumped to 246. So, I make bold to say that the Commission is winning the war against corruption.

“In terms of assets recovery/forfeiture, the Commission has secured quite a number of temporary or permanent forfeiture of properties and various sums of monies unlawfully acquired by persons of questionable character.”

He vowed to carry out a nationwide sweep against internet fraudsters from next month.

“More than ever before, we are giving Internet fraudsters sleepless nights; also, shady night club owners who harbour “yahoo-yahoo boys” now see the Commission as a pain in their necks.

“So also we have begun to send red alert to car dealers to check their books or be ready to face the wrath of the law.”