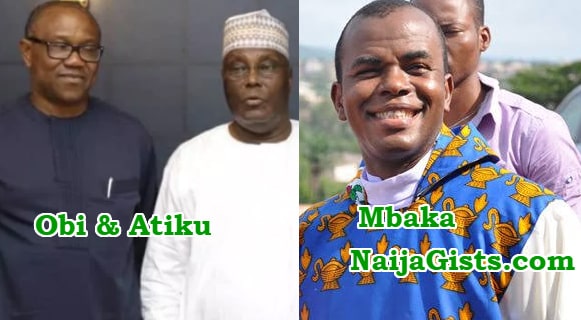 Peter Obi To Igbos: Stop Attacking Rev. Ejike Mbaka Over His Prophecies On Atiku & Buhari, He Speaks From Higher Perspective Of Wisdom

Obi’s reaction came following a pronouncement by Mbaka on Sunday that both Alhaji Atiku Abubakar of the Peoples Democratic Party and President Muhammadu of the All Progressives Congress might not win the 2019 presidential election.

In a statement by Obi’s media aide, Val Obienyem, the former governor of Anambra State said he did not feel bad about the priest’s pronouncement.

Obi maintained that in every situation, there would be something positive to learn from it, adding that Mbaka had always spoken from the “higher perspective of wisdom.”

The PDP vice presidential candidate implored the laity to always remember their priests in prayers, adding that it was wrong for priests to be attacked based on what they said on the pulpits.

“Please let us leave Fr. Mbaka alone; our duty to him is prayers for God to lead him aright.

“While one may disagree with him, we should always acknowledge that he speaks and acts from the higher perspective of wisdom.”

“I have full respect for men of God and will always remember them in my prayers. When they go wrong as humans, subject to human frailties, ours is not to castigate them, but to pray to God to lead them aright.”

Describing donations to churches as an “appreciation of God’s love and benevolence to us, Obi said, “they attract more rewards when done secretly.”

Before Obi’s press statement, Mbaka called out the former governor for not donating to the things of God.

The prophet also came under fire for asking politicians for donations.