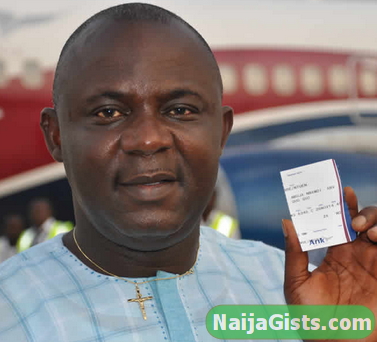 Nse Ntuen, Akwa Ibom Local Government Chairman who smuggled $82,000 out of Nigeria unchallenged has been arrested in the United States of America.

According to Maryland Police official, the Nigerian politician was arrested with a total sum of $82,000 on arrival in the US on Friday August 16, 2013.

Nse Ntuen, the Chairman of the Akwa Ibom State Association of Local Governments of Nigeria (ALGON), was on Friday arrested by operatives of the Maryland State Police Department at the BWI International Airport, Baltimore.

He was accused of not declaring the money to US and Nigerian Customs officials, a money laundering case.

An official of Maryland State Police Dept. at the airport said Nse Ntuen only declared $5,000 on getting to the airport. Mr Strike Thomas said the rest $77,000 was found in his bag after further security checks.

The official who agreed to be quoted pressed further that the chairman who flew into the United Stated from London, United Kingdom, was later taken to their investigation room where an additional $77, 000 was found in his bag.

Hon. Nse Ntuen who accepted he smuggled the money into the US claims he plans to donate the money at the just-concluded Annual International Convention of the Akwa Ibom Indigenes in the United States and Canada which was held at the Marriott Hotel in Washington, DC.

The suspect was later made to write and sign a statement where he accepted that he brought in items which he failed to declared to both the Nigerian and United States Custom agencies.

Nse Ntuen was held for over 5 hours before he was released. The whole amount he smuggled was seized by Maryland State Police Department.

He left the scene empty handed.

Chei! see Nigerian politicians and their show of shame.