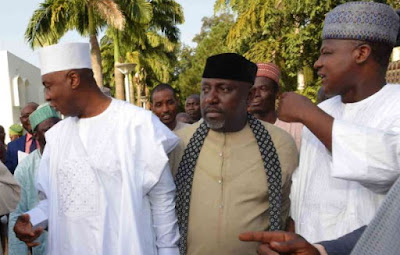 January 26, 2018 – Nigerian Politicians Do Not Have Principles, They Are All In Politics To Butter Their Bread

Nigerian politicians do not have principles and that they are in politics to feather their own nests. They jump from one political party to another as they are not ideologically rooted in any political party. Many of them are now leaving the PDP, the former governing party in droves to APC the current ruling party at the federal level.

They are doing this not because they believe in the ideology of APC which to me unfortunately is opaque but to seek ways to butter their bread in the federal government controlled by APC. The jumbo salaries being taken home monthly by our National Assembly members at the time when the minimum wage is mere N20,000 per month is a clear testimony, that the politicians in Nigeria are in the profession to feather their own nests.

Our politicians also lack the courage to speak the truth so as not to jeopardize the perquisites of offices they occupy. For these listed shortcomings and others not listed, I have no apology for the above characterization of our politicians.

However, despite my above take on Nigerian politicians, I respect and admire few of them. One of the politicians who earn my respect is Chief Audu Innocent Ogbeh, Minister of Agriculture in the present Buhari’s federal government. In fact, to me he is one of the few performing ministers in the cabinet despite his age which is above 70 years.

Audu Ogbeh came to national prominence in 1982, when he became minister of communication and later of steel development in the inefficient and rudderless Shagari government of 1979 to 1983. Despite the fact that the administration he served was a disaster, Audu Ogbeh left with his honour intact when the Buhari-led military coup sent the administration packing. When politics returned fully in 1997, Audu Ogbeh joined the PDP and was drafted by Chief Olusegun Obasanjo to be the chairman of the party in place of Chief Barnabas Germade, who could not be controlled by the all-powerful President Obasanjo.

Audu Ogbeh held the post of the chairman of PDP from 2001 to 2005. He had offended Obasanjo for writing a well-publicized letter where he detailed the highhandedness of the president in the affairs of the party. His principled stand against the mighty President Obasanjo was applauded by many Nigerians. He later resigned from the party and returned to his Efugo farm in Makurdi.

Audu Ogbeh came to his present post in 2015, and Nigerians were told by the Vice-President Professor Yemi Osibajo that he was begged to take up the post. Personally, I think he was the right person for the job. There is no doubt that Chief Ogbeh has performed creditably well in this post despite his advanced age.

I am in position to asses him objectively because I am a professional agriculturist trained to the highest level in the profession. Having said this, I believe now that Chief Ogbeh is now suffering from what people referred to as ‘diminishing return’, if one judges by the fiasco that characterised the recent exportation of yam to USA under his watch and his recent patronising and insensitive comments on the fiendish activities of the murderous Fulani herdsmen in Benue states and other parts of northcentral and southern states of Nigeria.

I consider the ill-fated exportation of yams to USA as nothing but unnecessary playing to the gallery because we are yet to satisfy our internal need for yam consumption in the country. In a bid to impress Nigerians that yams can bring needed foreign exchange to the country, proper paper documentations with regard to sanitation and customs requirements were not properly worked out. We arrogantly refused to learn from Ghana which has been long in the business of exporting yams to USA. The net result of this unplanned venture was a national disgrace as the exported yams were rejected in USA with attendant loss of revenues to the country. I hope proper lessons had been learnt from this unmitigated disaster for future guidance.

It will be an understatement to say that Audu Ogbeh disappointed many Nigerians by his recent statement on the murderous activities of the Fulani herdsmen who had been tormenting our country. Their latest murderous action led to the untimely and unnecessary death of 71 of our country men and women in Benue State. According to Ogbeh, “the inability of the government to pay attention to herdsmen and cow farming unlike other developed countries contributed to the killings”. He continued to tell Nigerians that unlike other farmers involved in arable and permanent crops, the herdsmen had been ignored by the government.

This is an unfortunate statement coming from a man known for his principles and honesty. Audu Ogbeh by this statement was inadvertently justifying the killing of his fellow citizens in his own state of Benue State and other states in the country. His statement is in the same despicable league as that of the Inspector General of Police Ibrahim Idris who said the vicious killings in Benue State was a result of communal crisis. Audu Ogbeh is a well-educated man and as a former university lecturer, I expect him to have done a little research and consultations with officials of his ministry before making the statement that has brought down his esteem as a principled and reasonable politician. I am sure that he made that statement so that he would continue to be in the good book of the ruling elite in the country.

I know as a matter of fact that since 1973 when the first document titled ‘Agricultural Development in Nigeria (1973-1985)’ was prepared by the late Professor Olajuwon Olayide, the renowned agricultural economist and former vice chancellor of University of Ibadan, efforts had been made to encourage the Fulani herdsmen to embrace settled agriculture through ranching and use of grazing reserves.

The inability and omission referred to by Audu Ogbeh in his statement were not necessarily caused by the government but were brought about principally by the refusal of the Fulani herdsmen to embrace modern system of livestock farming which has been adopted by many developing countries in Africa such as Kenya and Botswana. Their obduracy to this system of modern livestock farming was because they had solid political backing at the federal level and this still continues till the present time.

Nobody with conscience and human feeling will find any justification for the barbaric killing in Benue State after watching the gory pictures emanating from the mindless massacre. It is unfortunate that Ogbeh made that statement and with this statement, I think for some inexplicable reasons, he has lost touch with reality. He should now bow out and go for deserved rest in his Efugo farm in Makurdi.

Luckily for him, he should take advantage of the imminent cabinet reshuffle to tell his boss that he wanted to throw in the towel. I sympathise with the families of those who were needlessly hacked to death in Benue and other states by these untouchable marauding Fulani herdsmen.

Continue Reading
You may also like...
Related Topics:nigerian, politicians, principles