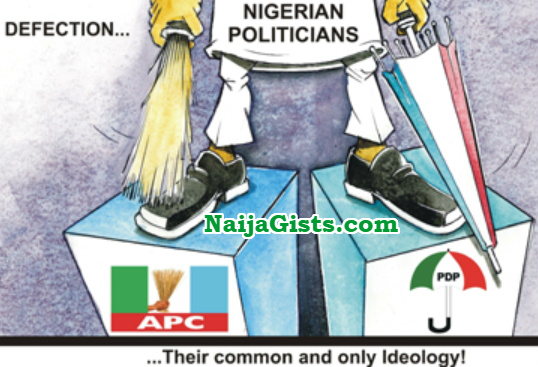 Nigerian Politicians Are Typical Schemers With Enduring Philosophy Of Self Preservation

Nigerian politicians are typical schemers with enduring philosophy of self-preservation. They are sustained and chaperoned by wily old foxes that have held the nation by fair and foul means; and when it serves them, including diabolical means. The power cabal driving the Nigerian state is fetish and selfish; like the PDP like the APC. This is the reason why they gravitate towards the levers of power for continuous relevance. The mass defection and carpet-crossing in the National Assembly from APC to PDP was long in coming; hatched from birth. It did not come like a bolt from the blues. It was primed and calibrated from the inauguration of the government when the different tendencies that formed the coalition called APC schemed for the leadership of the National Assembly.

The PDP and the APC have a common political ancestry from the old order of graft and patronage. Nigerian politicians operate like itinerant nomadic herdsmen, perpetually foraging for green grass to graze. The defection therefore is like the return of the proverbial Biblical prodigal son; it is home coming. There is hardly anything to choose in terms of principle between those remaining and the ones that left the party; it is all about political equation of security of place in 2019. Both ways, the masses are the losers because we are contending with buccaneers and political merchants. We are dealing with a bunch of people who would not care a hoot to auction Nigeria and go shopping in Dubai with the proceeds. The Nigerian politician is extremely corrupt without any redeeming feature or morality.

Recall the Halliburton’s scandal, it was perpetrated by government officials at the highest level; the president at the time was even fingered but he denied. Nobody was ever punished! Recall the mind boggling loots attributed to a former minister of petroleum who voted with her legs and now live on self exile, and many more. Some other alleged looters are lucky to be protected by virtue of being prominent members of the ruling party.

While Jonathan’s PDP was perceived as clueless, Buhari’s APC is self-righteous, opinionated, cocksure and defensive. The choice left for us come 2019 is very limited because of dearth of credible and reliable alternative; after all, the PDP is already threatening to boycott the General Election of 2019. Knowing the politicians as we do, they would not bat an eyelid to have a trade-off with the APC while they pull wool over the eyes of the masses.

The APC may want to deny the impact of the defections lightly, but it would be at their peril because they very well know the import from experience because they are by-product of the same protest which like the PDP, they have also grossly mismanaged. The loquacious national chairman of the APC may go to town with megaphone that those who defected have no electoral value but he should also ask himself what more is left of the president in the face of the existential realities that confront us today. The president has been so insular that he has alienated a huge chunk of his support base because of his clannish world-view and sectarian disposition of his kitchen cabinet.

They have chosen the strong arms tactic of employing force and intimidation to deal with otherwise civil matters which could have been better served by simple diplomacy and inclusiveness. Under the watch of APC government, the security forces and police have become partisan and compromised more than ever before. If nothing is done to arrest this trend, sooner than later we may find ourselves succumbing to individuals who would become so powerful as to hijack state powers to form their own militia and become warlords to challenge our corporate entity and sovereignty.

Whatever good the defections may serve, it is also clear by the day that the integrity of the president alone can longer meet the expectation of the people who are hungry for a real change. President Buhari has thrown his heart into the contest and urged anyone with courage to challenge him. We know from experience that we do not have men of conviction and courage to challenge the incumbency even when it is obvious that he has become difficult to market. The politicians play the zombie always and do not have the gut to challenge and speak to power.

The defectors have also thrown their heart in the ring for a real duel and the stage is set. It is a test of popularity of who has the following of the people. Unfortunately, there is not going to be a level play ground for the contestants. As usual, everything would be brought in; the contestants would struggle to out-rig one another. The game changers would be the electoral empire, INEC and the security forces. Would they be neutral?

We have remained where we are politically because of our own attitude more than having rogue politicians presiding over the ritual of sharing our national budget and gallivanting all over the place. We cannot eat our cakes and have it. We have commercialized our PVC and the merchants would have to recoup their investment and profit later. So if we hope for any developmental project in our constituencies when we have traded with our voters cards, it may as well be a huge joke. Look at the governor the people voted for that refused to pay workers salary but when elections approach, he started paying bribe into account of workers to secure vote and tenure. They ignore basic issues of governance and dwell on sectarian distractions that are divisive. Now they hold the short end of the stick, crying; maybe you would say, serves them right!

For today, we appear faced with the tyranny of abuse of power. The Nigerian Police has virtually become a Gestapo used by the state to harass and intimidate opposition and critics to submission. Even though they struggle to arrest common criminals, they are quick to crush legitimate peaceful protests and even invade the National Assembly to arrest elected representatives without good cause. The government is yet to find voice against the rampaging herdsmen terrorizing communities across the country and leaving trails of blood and destruction on its path. Insurgency in the Northeast is proving to be like the hydra-headed snake which has refused to die. Kidnapping, banditry and general insecurity now define the entire landscape of our country. If you sleep and wake up, your car battery, cooking gas cylinder, generators and other valuables are gone; that is if the bandits do not wake you up to submit your car key and ATM cards to them.

Many more people are losing their jobs by the day and for those who are lucky to be employed, salaries are half or owed perpetually in areas. Children are out of school and daily survival has become our greatest needs now. For now, it is the way they come, the way they go, fair weather politicians.

[About the author: Kebonkwu Esq writes from Abuja.]