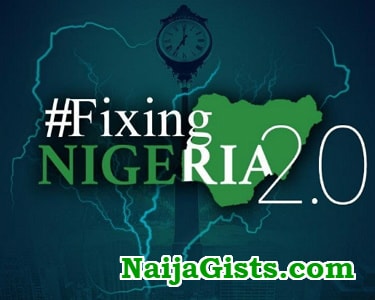 On the 9th of May, 2018, I joined Nigerian youths under the auspices of the ‘Emerging Political Leaders Conference’ as they held the second edition of their annual summit tagged ‘The Presidential Aspirant Edition: Goodbye to Failed Campaign Promises” at the Shehu Musa Yar’Dua Centre, Abuja, FCT.

It was a good opportunity for Nigerian youths to network, pose for the cameras, and more importantly, discuss issues of leadership, politics and economics as they affect Nigeria.

Although I took a picture or two, I was mostly disgusted with the whole affair for the simple reason, that it seems all we know how to do in this country is TALK.

It appears also that even the youths do not seem prepared to offer a way out of the cycle of fruitless talk.

For years we have been talking in this nation, and the youth, the supposed engine that should drive the economy of the nation, the so called 60% of the total population, is not left out of this cycle of talk, talk and talk without action.

As at the time of the EPL Summit, it was reported that over 900 Nigerians, especially indigenes of Benue State, have been killed since January 2018. Experts say this translates to an average of 7 deaths per day! Bishop Oyedepo of the Living Faith Church noted that even though we are not at war, we have been conducting mass burials. Do we not care for own?

I am confused. How can we live with this kind of reality? What are we talking about? What are we analyzing when people are being killed daily, people with families and loved ones like us? A colleague voiced concern last week that if Nigeria were to be a serious country, every activity ought to have grinded to a halt until these killings were stopped. I share his sentiment as I believe that the entire security apparatus of the nation should be overhauled.

Even though I am not with those calling for street protests, I took a critical look around and found that, as of today, there appears to be no serious minded passionate youth to lead that others can rally behind.

Take for example, fuel prices were increased by almost 100%; we complained, talked and went back to watching Premiership League.

The economy is in shambles, President Buhari has appropriated almost the entire government to an exclusive Daura enterprise and all we have done is complain and talk.

There is virtually no day we wake up now that we don’t hear of a massacre somewhere, and all we do is talk and organize youth summits where we invite the same politicians who have put us in this mess in the first place, to speak, massage their stinking ego and launder their rotten images.

Meanwhile, elsewhere in the world, youths have been at the forefront of the fight for real change.

From Parkland, Florida, USA to the Arab Spring we have seen young people all over the world with a long history of pushing for social change.

In USA for example, it was even teenagers who maintained a clear message recently against school shootings, mobilized the entire nation, and rallied the support of celebrities and even politicians to engage their leaders!

If we look at the history of the world this is not strange, except perhaps in Nigeria where we still find youths invading the National Assembly to steal the maze or snatch ballot boxes on election days, or disrupt party primaries or engage in other vices.

What we saw in the USA and in other places of the world recently are just the newest chapter of century’s long chain of youth activism against injustices and evil.

For example, young people were very influential in the movement that desegregated schools in Jim Crow, challenged racism during the Freedom Rides, and pushed for voter rights and civil rights legislations in American history.

Many of us who are familiar with history will not forget the violence and subsequent massacre of Tiananmen Square in China in 1989.

Chinese youths had assembled on the street, waving banners, making speeches and singing songs, in protest to demand democratic reforms and economic liberation. On June 3rd and 4th thousands of Chinese soldiersopened fire and using their tanks, crushed hundreds of the protesters to death.

Even though till this day China has never officially recognized the massacre and continues to censor information and discussions on the subject, the sacrifice those youths made is testament to the fact that the future of a nation lies in the hands of her youths.

We also do not need to travel far in memory lane to replay events of the Arab Spring in our minds, because that’s recent history. Frustrated by police corruption, economic woes, human rights violations, oppressive regimes; Arab youths took part in waves of protest that had earlier been sparked when a Tunisian street vendor out of frustration, set himself alight.

Analysts like M. Chloe of Boston University believes the Arab Spring “could not have occurred without the ideological and numerical push of a huge mass of angry youths…”

I could go on and on…

Today, all the factors that have led to huge protests which have changed countries for good in other places are currently at play in Nigeria, sometimes in even a much more gruesome manner.

Yet we all saw the enthusiasm on the part of Nigerian youths when Big Brother Naija aired, when Davido gifted his girlfriend a 45 million naira worth car, or when the Headies Awards were announced.

How many Nigerian youths watch the news? How many still remember Leah Sharibu or the faceless kids killed daily by Fulani herders or Boko Haram?

Yet, some still find the nerve to sing the hash tag #NotTooYoungToRun.

If we are so scared for our lives and cannot go out in the street to demand an end to the killings in Nigeria today or demand that our leaders live up to their campaign promises, at least I expect to see a proactive youth population that by her actions would make our leaders know that the youths indeed make up 60% of the population.

No one would shoot us if we go out and get our PVCs in preparation for 2019. No one would kill us if we decide to send Buhari and his inept government packing next year.

Or are we going to just keep TALKING and organizing youth Summit upon Summit?

Abuja Based Business Man Murdered In Enugu..Chinedu Nzegwu Is Dead
Video: Wife Catches Cheating Husband With Mistress At Colombian Airport As They Head For Vacation