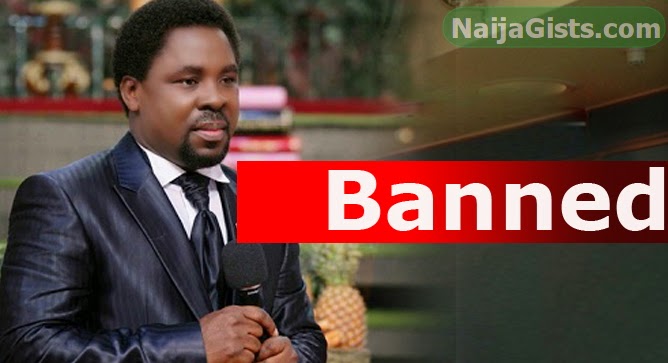 Temitope Joshua, the healer and his wise men as they are fondly called have been denied South African visas and banned from visiting Zimbabwe.

This came as a result of a tragedy that killed over 80 South African pilgrims at his church earlier this month.

Why Many South Africans Died At TB Joshua’s Church

According to reliable sources, South Africans are passionate about the Synagogue Church, always coming there on pilgrimage.

There is a tour package which cost an average of 10,000 Rands each for one week. The collapsed building was meant for Southern African groups like worshipers from Namibia, Lesotho, Mozambique, Botswana and the Republic of South Africa.

Worshipers from Malaysia, Taiwan, Singapore, Japan also use the collapsed building but investigation revealed that South Africans were more because Pastor Joshua decided to give more opportunities for the South Africans who have remained insistent and shown solidarity to SCOAN. No fewer than 84 South Africans were killed in the tragedy.

Healing of sicknesses and diseases also bring nationals from other countries to Synagogue – all for miracles. Holy water, otherwise called anointing water, is sold to pilgrims between N5000 and N10,000 per bottle.

Even thousands of anointing water bottles are exported to some West African countries. Worshipers from foreign nations are encouraged to stay until after seven days. They are always screened and registered by the church authorities. Those with financial problems believe that use of the anointing oil restore their finances.

Meanwhile, it was gathered that the ruling African National Congress, ANC, Youth Wing had warned Pastor T.B. Joshua not to come to South Africa. He should not enter the country until they know what happened to their compatriots in Nigeria.

According to Bandile Masuku of ANC Youth League, “we will make sure that Pastor T.B. Joshua is not issued with a South African visa.”

The influx of foreign nationals into the church could be explained by the adage that a Prophet is not acknowledged or recognised in his own country. But with this tragedy, many people are becoming scared of the Synagogue church and more knowledgeable about what goes on there.

Strangely, however, several South Africans, we reliably learnt, are still anxious to return to Nigeria to patronize the church because of their believed spiritual prowess of Pastor T.B. Joshua.

He is feared and highly respected by politicians, including prime ministers, presidents and ministers. Even sports men come to the Synagogue not only for healing when injured but also for for success in their outings. Prominent athletes and footballers have gone there to seek one form of help or another.

May the souls of those who perished rest in perfect peace and may God give the living a discerning spirit.

“Dear friends, do not believe every spirit, but test the spirits to see whether they are from God, because many false prophets have gone out into the world.” – 1 John 4:1