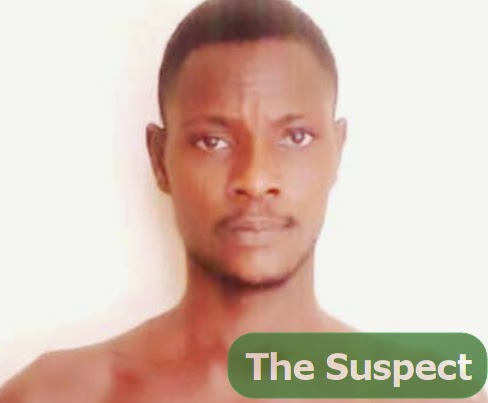 Pictured above is 32-year-old Chinedu Nweke who recently unleashed terror on a village woman in Ebonyi State.

The victim identified as 45-year-old Philomina Nwega who hailed from Ebuku Ndieze Amudda in Umuzeoka village, Ezza North LGA of Ebonyi was brutally beheaded by the suspect in a bid to revenge the rape of his wife.

According to Ebonyi Police Commissioner Mr Maigari Dikko, the attack happened on the 6th of September 2014

“I am a farmer. Villagers raped my wife severally. And it made my wife to have mis­carriage anytime she was pregnant. I never complained about this problem to the police. It was on September 6, 2014 in the evening that I saw a woman coming from the farm. I waylaid her and I used my cutlass to kill her. I cut off her head which I dumped alongside her lifeless body into the Ogbor stream. I cut her head into pieces and threw them into the stream. It was at Umezeoka that the people raped my wife and that was where I killed the woman. Each time my wife was raped I bought drugs for her but I didn’t report the incident to anybody, not even to the village head or the traditional ruler.”

After the murder, the suspect reportedly threw the victim’s headless body into the river.

Police were able to recover the headless body of the victim but they couldn’t recover the severed head.

While the police continue with the interrogation of the suspect, the husband of the deceased, Mr. Bar­tholomew Nwega said his primary headache is seeing the severed head of his late wife recovered so that she could be given honourable burial. In a broken voice that belied his grief, he said: “I am pleading with the police to help me recover the head of my dead wife.”

What a world! May the soul of the victim rest in peace.