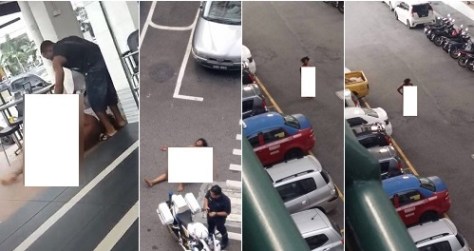 May 11, 2017 – Nigerian Prostitute Runs Mad, Strips Self Naked After She Was Drugged By Client In A Malaysian Hotel

Forget the viral story of an alleged Nigerian prostitute that broke yesterday.

A Nigerian guy in Malaysian just sent NG the true version of the pathetic story.

The lady who stripped herself naked in the viral video uploaded to liveleak on Tuesday the 9th of May 2017 was said to have been drugged by one of her clients (fellow Nigerian) in a Malaysian hotel.

While under the influence of the drug, the lady simply identified as Osaro allegedly stripped herself naked, abandoned her belongings and stormed out of the hotel naked.

At a point, she spread her legs wide open while a Nigerian guy tried all his effort to pull her out of the public but the more he tried to help, the more wild she became.

She was abandoned by the guy who tried to help her and was seen walking stark naked on the streets of Malaysia as some people poked fun at her.

12 thoughts on “Nigerian Prostitute Runs Mad, Strips Self Naked After Client Drugged Her In Malaysian Hotel”