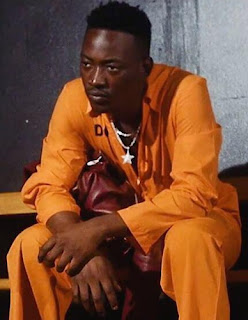 On June 2, the internet was agog with the news that Nigerian singer, Dammy Krane, whose real name is Oyindamola Emmanuel Johnson-Hunga, was arrested in Miami, U.S, for credit card fraud.

But on August 17, a US court struck out the nine charges of credit card forgery, armed conspiracy and grand theft.

He was arrested after a private jet service company, TapJets, alerted the US police that the singer made a booking totaling $10,943 with stolen credit card details.

He was detained alongside one Ilochukwu Gabriel at Turner Guilford Knight Correctional Center before making bail. Circuit Judge for the 11th Judicial Circuit of Florida, in the Criminal Division, Judge De La O Miguel in August discharged Krane of all charges.

The singer stayed just a little longer in the US and returned to Nigeria. He speaks to LANRE ODUKOYA about his jail experience, his career plans and women.

How long did you plan to stay in the US?

I was supposed to stay for two months for the tour.

Where were the places you were supposed to tour?

I had gone to most of the places already. I had gone to Chicago, Dallas, New York, Boston. I was about to do another show when everything happened.

At the time the incident happened, how did you take it? Did the guys in charge of the ticketing show any remorse?

Definitely! It was a misunderstanding. We thank God that everything has been cleared and I’m free of all charges. But for those people that really want to know what happened, they can go and watch the video of Prayer on YouTube. I put everything in ithow I was arrested and all of that. It’s on Youtube. It’s my brand new video.

When did you release it?

Your previous popular single was titled Amin, and this new one is Prayer. Don’t you think the meanings are too close?

They are spiritual songs. They didn’t just come like that. Amin came when I lost someone very close to me. Prayer came when I got locked up. I wrote Prayer in jail.

Were there cabals in the US prisons?

When I first got to jail, my first roommate was from Haiti. He asked why I was locked up in jail. He explained to me that there were cartels in jail. He told me that I shouldn’t mix with the Spanish guys, so I was only close to the Haiti guys and they protected me.

Did you have people with similar stories who later became your friends?

In my block, I was the only one that had that kind of story during my stay there.

Were you not troubled by what was happening to your name back in Nigeria?

The good thing is that I was always talking to my family, my management and my friends. They kept telling me everything that was going on. They were ‘tweeting’ everything I was telling them to tweet.

Did you have access to phone or the Internet?

During the four-hour timeout, you are allowed to use the phone. That was how I made contact with my management.

Going forward, what are the plans for Dammy Krane?

Were you not disappointed in a lot of people who didn’t show you love at your lowest time?

Never! It’s at your low time that you know who your real friends are.

Have you resolved the misunderstanding you had with Wizkid before you went on the tour?

We’re cool. When I landed, he actually told me he wanted to do a song with me. But right now, I have some projects I’m working on.

The Ogu people in Badagry did a positive campaign for you during your ordeal. Are you from Badagry?

Are you a Lagosian?

My mum is from Lagos and my dad is from Ado Odo Ota, Ogun State

When you talked about more music, does that imply an album?

It depends on the demand that’s when I could put out an album. But it’s just going to be singles back to back.

Are you looking at staging your own concert like some other colleagues of yours?

Is Dammy Krane in a relationship?

I don’t have a woman in my life right now. It’s Dammy Krane for the girls.

Continue Reading
You may also like...
Related Topics:dammy krane, ordeal, prison, us