Another Nigerian has been murdered in cold-blood in Malaysia.

According to an email NaijaGists.com received from some irate Naija student based in Malaysia, a young man identified as Adelabu Tunde who hailed from Ise Ekiti in Ekiti state was recently murdered on the streets of Malaysia.

The email disclosed that Tunde and his friends returned from school one afternoon only to discovered that police men were raiding an apartment close to theirs.

When the saw the policemen, they attempted to leave their apartment and as Tunde tried to run away, he got shot on the head by one of the policemen.

His friends said he wasn’t fighting and that the policemen who shot him wanted to get some bribe.

They further disclosed that the police officers who came for the raid ran away after shooting him.

The angry Nigerian students have called for the immediate removal of Nigerian ambassador to Malaysia. They have also called on International Human Right for justice. 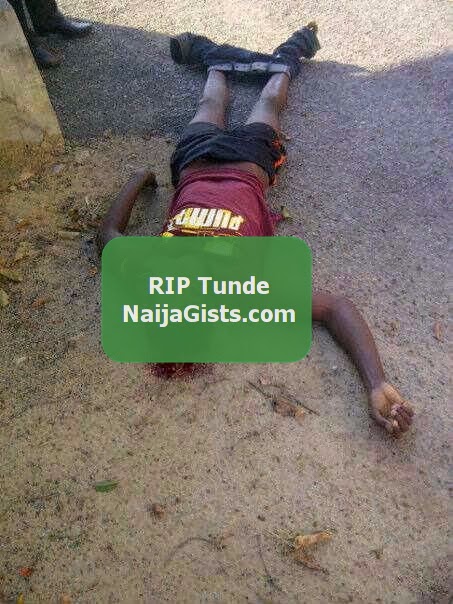 The student said the ambassador care less about the well-being of Nigerians in Malaysia.

They also made huge accusations against the Nigerian Embassy in Malaysia in the mail.

Below is an email Nigerian students wrote about the current Ambassador to Malaysia:

1) AMBASSADOR – The Nigeria Ambassador in Malaysia HIS EXCELLENCY, AMBASSADOR BELLO SHEHU RINGIM, NIGERIA is  the most corrupt Nigerian in diaspora. ranging from selling diplomatic passports, conniving with malaysian police to arrest Nigerians and deport them and also setting them up with drugs case so as to make money in terms of releasing or granting them bail. Being money concious he has said it before that Nigerians here dont pay homeage to him. (We are students your excellency and you dont enxpect us to spend $1 on you SIR, because you are appointed by the Nigeria government not by our parents.)
2) Ambassador: The ambassador and so-called workers in the Nigeria embassy demands more than the actual amount for new passport or replacements of passports whereby a student passport is misplaced or expired. The embassy demands more than one thousand dollars for new passport and takes days.
3) Ambassador: Nobody, i repeat nobody have ever questioned the Malaysian Government why they harass students knowing fully well that these students when they summit their passport  for visa renewal, visa-holding letters are normally given to them by the Malaysian immigration yet their police and immigration during raiding still arrest and deport legal students having these letters. Of all these activities, the Ambassador is fully aware and his not showing concern about its fellow Nigerians. Although
4) The ambassador believes that everybody in Malaysia is not a student. Meanwhile the Malaysia Airport(KLIA) is one of the best airport in the world combating drugs and illegal immigrants. 80 percent of Nigerians in Malaysia apart from the once the AMBASSADOR sold diplomatic passport to are students. Be it a small scale school or International Schools in Malaysia Your excellency sir all fingers are not equal.
5) Imagine the security at the gate of the Nigerian Embassy (An Indian and  Bangladesh)  molesting Nigerians in front of the Embassy just because they want to go into their own Embassy to get their passport renewed yet the Ambassador will show no concern and sometime drive by. (Ambassador)
6) The ambassador told the Malaysian Government not to renew visas for Nigerians or hold it for a long period of time with this we get arrested, detained to pay a ransom before finally being deported.
Just mentioned but a few of the fraudulent activities of the Nigeria High Commission in Malaysia, NEXT will be an Open letter to Mr President (GEJ) if nothing is done within the next 72hrs not only an open letter but just like a tip of the 2011 riot that Niger Delta Amnesty student we will storm the Nigeria Embassy and the world will hear your corruption Your Excellency.
– STUDENTS IN MALAYSIA

Please our people should try and stay home if possible am sick and tired of all these stories about the murder of Nigerian students worldwide.

Rip Tunde, may God fight for you and bring your killers to book.