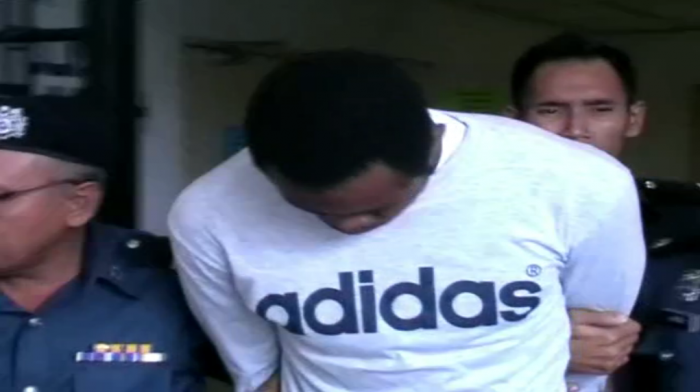 Jan 25, 2013 – Nigerian Student Sentenced To Death By Hanging For Drug Trafficking In Malaysia

John Amaechi Eze, a 23-yr-old Nigerian student studying at a college in Kuala, Lumpur in Malaysia has been sentenced to death by hanging over drug trafficking. naijagists.com

John was found guilty of cannabis trafficking two years ago but his sentencing took place few days ago.

According to the judge in charge of his case, the prosecution had proved its case beyond reasonable doubt against John Amaechi Eze.

According to reports on NewStraitsTimes, in his judgment, Judicial Commissioner Mohd Zaki Abdul Wahab said the accused claimed he was waiting to board an express bus at a restaurant in front of the Lye Huat Garden hall when he was arrested by police.

However, he said the court did not believe his claim that he did not own the luggage when witnesses had testified that he was with the luggage all the time.

After his sentencing, a blogger who lives in Malaysia by the name of Ola shared his experience on how Nigerians are battling to survive in Malaysia over racism and discrimination.

Below is what Ola has to say;

Now, for anyone harboring thoughts of trafficking drugs to this country, this is what you get. It beats me why someone would risk their life, by taking banned substance to this racist ******* called Malaysia, because when issued a visa, it is clearly stated that the punishment for drug trafficking in Malaysia is death.

To be fair and honest to Malaysia, there are some very nice and wonderful people out there, but they are greatly outnumbered by the bigots among them. I live and study in Malaysia and I’ve observed a bias pattern in judicial procedures and policing  as regards drug trafficking and crime prevention.
My assertions are based on my day to day experience and observation as a resident.

I have no statistical analysis of the Nigerian population living in Malaysia neither do I have the exact figures or nationality of the number of cases prosecuted by the Malaysian judiciary.
From the Nigerian side, The easterners (Igbos) out-number other ethnic groups within the Nigerian community here. That’s why most Nigerians you meet are from the east.

A lot Nigerians you meet are not in Malaysia to study, though they are enrolled in one college or another, they are semi-illiterates or outright illiterates, very lousy, brash and arrogant (for reasons I don’t understand). Then we have the stranded group who were duped by travel agents into thinking the pasture in Malaysia is greener.

In short, You meet criminals of all shapes, size and age. They just sleep, eat, wake up, and hope the next Maga pays. They are so much, you’ll think all Nigerians living in Malaysia are criminals, but we have bright students doing well and graduating in Malaysian Universities, we have gainfully employed graduates trained by Malaysians themselves (few) and business men and women doing legitimate business exporting goods to and from Nigeria (also few compared to the population of the Nigerian community).

But the Yahoo boys and drug traffickers are so high in number it seems they’ve all relocated from Nigeria to Malaysia. Conditions here favour them.
Basic infrastructure is great here compared to what we have in Nigeria. 24 hours electricity, running water, well laid roads, affordable high speed internet, compact 3/4 bedroom apartment, affordable furniture,  little or no scrutiny on international remittance etc. Malaysia is a Yahoo Boy’s paradise. Though, most foreigners especially new comers call them (Malaysians) lazy and stupid (I still don’t get the rationale behind that).

On the Malaysian side, you’ll meet the Malay Supremacist. A Muslim, religious bigot, loud, aggressive and assertive. He (male and female) hates Jews and despises Christians. He wants to protect the “sanctity” of Islam, State resources are at his disposal. His opinion and interest supercedes that of others. His ancestors are the first settlers in Peninsular Malaysia.

His interpretation of the Islamic text  dictates and guides the Muslim community and some times the whole nation. His favourite question when he meets you for the first time in class or anywhere is “Are you Muslim?”. He runs the country and he knows it.

Then we have the Chinese Chauvinist, a business tycoon/ hard working student. Drives flashy cars, he believes his race is the best. He is rich and he has read stories of Nigerians using Malaysian girls as drug mules, black/chemical money stories; he has meet or read of stranded Nigerians who loiter around Kuala-Lumpur begging for money (these stranded guys don’t shower, so they stink).

He cringes when you happen to be in the same elevator, crosses to the other side of the road when you are walking towards each other and always thinks you need something from him any time you try to talk to him. He has held on to so many Nigerian horrible stories and thinks every Nigerian is like that.

Then, we have the Angry Indian, always pissed and mean-mugging you. He has been discriminated against so much that even his language is not included in the country’s ATM machine (LMAO). He is always trying to pick fights with you and the first comment he makes is “THIS IS MY COUNTRY!”.

He’ll smash his crash helmet on you at the slightest provocation or stab you. He also reads of atrocities committed by Nigerians and sees you as a threat.
So, living in Malaysia has made me a racism connoisseur of sought. In fact, I have become so sensitive that I believe I can tell if an individual is racist within a few seconds of being around them. There are people in Malaysia whose sole purpose in life is just to ruin your day. Racism in Malaysia is perfect. It is subtle when it needs to be and brass when necessary.

As a foreigner you might be misled into thinking Malaysia is a boring place and no one gives a damn about you, so you can do what ever you like and get away with it. No, you are seriously mistaken. Malaysia sometimes feels like the North-Korea we watch on T.V. Some citizens are very nosy and they watch and observe every move you make. I read a news article some weeks ago that says about 80% of Police personnel don’t do normal Policing but rather, spy and gather intelligence.

So, my point is this. Malaysia is a tightly controlled society where the authorities decide what business prospers, whether legal or illegal. Elements within the police control the drug trade, the distributors are under their command and they arrest them when it’s politically needed to unite the country against a common enemy. We hear of stories of Iranian and Arab drug traffickers who are quietly deported and warned never to return to Malaysia but other nationalities are shown off as trophy in front of news men who broadcast and publish sensational news headlines.

South-east Asian countries are united against drug trafficking and they hold meetings regularly to discuss new strategies on deterrent, Death (rolls eyes). So, it baffles me why people still take the risks John Amaechi Eze was sentenced on January 22; a British Grand mother Lindsay Sandiford was also sentenced to death on the same day in Indonesia.

In the year 2008, two Nigerians were executed in Indonesia and one in Singapore.

A word they say is enough for the wise.