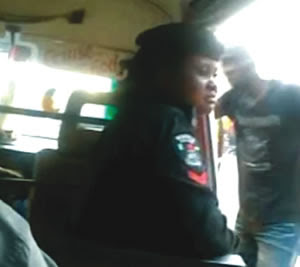 Two traffic police women, Corporals Elizabeth Itolor and Jennifer Azingbe, who were videotaped receiving N100 bribe from a bus driver in Lagos, have been dismissed from the Nigeria Police Force.

Itolor and Azingbe, attached to the Makinde Police Division, were said to have received their dismissal letters on Wednesday.

The Police Provost Unit of the Lagos State Command concluded an orderly room trial of the policewomen last week.

Both women were said to have spent nine years in the police as they were recruited in 2004.

A source, who requested anonymity, told PUNCH Metro that Itolor and Azingbe got their letters at their duty post.

He said, “They reported for work this morning and they were given dismissal letters. They have been crying ever since and appealing to everyone they know to help them salvage the situation.”

The corporals’ dismissal is contained in a circular which stated that the policewomen were dismissed over “despicable acts and corrupt practices contrary to Paragraph E(iii) and C(iii) respectively of Schedule 1 of the Police Act and Regulations 370 of the Federation of Nigeria 1990.”

A video footage on Youtube posted by one Afro Finlandia a few weeks ago, showed one of the policewomen negotiating a N100 bribe with a commercial bus driver at the Oshodi/Apapa Expressway.

The video, which had over 40,000 views, and generated public outrage on social media, led to the arrest of the women.

In the video, the driver was seen trying to negotiate his way out of a bribe. But despite the driver’s pleas, the policewoman refused to let the bus move from the spot after taking on more passengers.

Angry, the driver was heard saying, “Don’t abuse me because of N100. How much is N100? Me I don pass N100.” The policewoman, who was sitting in the bus to prevent the driver from taking off, retorted, “E no concern me. Pay me my own money.”

The driver then instructed his conductor to hand over N100 to the policewoman. The policewoman subsequently alighted from the bus and was later seen in the video walking away with her colleague.