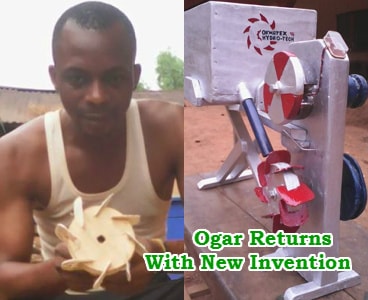 Mr Augustine Otuokwa Ogar, a graduate of Electronic and Computer Technology from the University of Calabar has invented a device that generates up to 20 watts of Power to charge mobile phones.

Here is what Ogar told Calabar Reporter on how the device works.

“The device has two wooden tank (the up and down tank) for collection of water, a pen stock to control water out of the upper tank to the turbine, the turbine that convert the potential energy of water into mechanical energy that rotate the alternator through the pulley system, the alternator that generates power and lastly a riding machine injector pump motor which pump back water from the down tank to the upper tank and the process continues”.

“A bucket of water if emptied in the tank and water is allowed to flow and hit, turn the turbine which rotate the alternator, then electricity is generated which then energizes a small pumping machine that pump back the water into the first tank then process continues. The system carries two tanks, up and down tank. I decided not to show everything here for technical reasons

“It operates without a repulsive force or zero back electromotive force (emf). I invented it to be used for practical demonstration on hydroelectricity. It generates up to 20 watt during operation but I stepped down the power to power one blinking LED for demonstration and technical reasons.

“The system generate up to 20 watt of power that Powers the injector pump and some phones and it operates when the top tank is filled with a bucket of water and it’s a continues system. Although, not every part of the system is shown here for technical reasons because it’s going to be a huge technology in the nearest future.

It shouldn’t be a surprise to any one that water contains both potential and kinetic energy and the law energy that it can be converted from one form to the other. On like mechanical generators, this device has two major sections also, the turbine that does the conversion of the potential energy of the River into motion serves as the mechanical part of the device while the alternator which convert this mechanical energy into electricity, is the electrical part of the device.

“The river that carries both the kinetic and potential energy is the fuel or the power house of the device. This is an era of renewable energy, can we join hands together to really developed this local innovation to solve the problem of power outage in Rural and Urban areas? And also to combat the challenges of global warming? What about training of youths on hydroelectricity by establishing renewable energy? Building training centers across the country and also creating job opportunities. God bless Nigeria”.